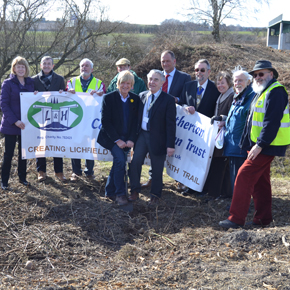 WCL Quarries is working with the Lichfield and Hatherton Canal Restoration Trust to re-establish the canal running between Brownhills and Lichfield, which was abandoned in 1954.

WCL has allowed the Canal Restoration Trust access to its Cranebrook site in order to work on the canal and use its excavators and personnel.

Peter Buck, Engineering Director at Lichfield and Hatherton Canal Restoration Trust commented on WCL Quarries contribution to the project: “Without them it would be impossible for us to complete the regeneration of the canal, which we hope will transform the local area and create a beautiful waterway for everyone to enjoy at their leisure. It is brilliant that we have been able to progress a multi-million pound project, using only volunteers.”

Mark Deadman, Director of WCL Quarries added: “At WCL Quarries we are committed to working together with our neighbours to support the local community and are honoured to be involved with the regeneration of the canal. It’s great to work alongside the volunteers, who range from teenagers to pensioners in order to complete the restoration.”

The restoration project has won over the support of high-profile figures including Lichfield MP Michael Fabricant and Poirot actor David Suchet, who is also the Trust Vice President and has headed a funding campaign.

Last year the trust won a Social Investment Business grant which has helped to fund the project, including clearing a 1km hedge, planting 800 trees and building a culvert.

The canal is expected to take approximately 10 years to complete, with the hope that the project will bring a new influx of tourism to Lichfield, as well as provide employment opportunities through the redevelopment of the disused land.