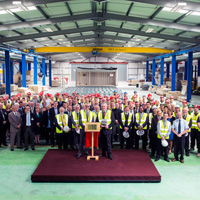 Having been derelict for six years, the site purchased at Kenfig required a £3million development, including:

The development cost also included a new 630m2 office building to be manufactured at the front of the factory, which took 8 weeks to manufacture and install.

The site purchased at Kenfig required a £3million development, having been derelict for six years.

A larger factory will result in an increased output, in addition to an increase in efficiency. The factory is already producing more than was possible at the previous site in Neath, and once the third line becomes fully operational Wernick Buildings will be able to produce nearly twice as much.

During his opening speech, Chairman David Wernick acknowledged this by announcing his aim to double the company’s turnover over the next three years.

Mr Wernick commented on the increased employment opportunities the factory will bring with it: Within the first four weeks of operation at Kenfig, 8 additional jobs have already been created and it is hoped that a further 40 to 50 jobs will be created over the next few years. Our policy of taking on new young apprentices in the factory will also continue and grow.

First Minister Carwyn Jones:It was great to officially open this excellent new facility today. It’s positive to see a company like Wernick Buildings committing to and investing in their operation here in Wales. This investment will create jobs, growth and wealth for the Welsh economy and that’s to be welcomed. I wish them every success in the future.