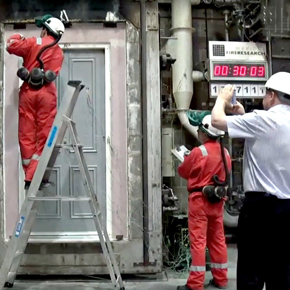 West Port FD30 fire doors have cruised through recent rigorous testing, with results showing they can withstand fires for 40% longer than the legal requirement.

The Cumbrian-based bespoke timber experts’ doors earnt the FD30 rating by holding flames at bay for half an hour; severe testing by both Cambridge Fire Research and BRE saw the door cope with temperatures of over 800 degrees Celsius, for a whopping 42 minutes.

In the aftermath of the horrendous Grenfell Tower tragedy, fire safety is being talked about more so now than it has done for some time.

This is something West Port Commercial Sales Director’s Ken Mercer spoke about, also saying that attitudes towards fire safety have been much too lackadaisical and everybody in the construction industry must act, so nothing on this scale ever occurs again.

“That can lead to products with FD30 components that only last a fraction of the time they’re supposed to. We’ve come across FD30 fire doors that fail in under 15 minutes before, which is simply unacceptable.

“At West Port, we treat fire safety with the utmost seriousness and our fire-rated products are among the most robust and reliable in the industry.

“We treat 30 minutes as a bare minimum, not a target and because of that, we’re delighted, but not surprised, to see our product perform so well in testing.”