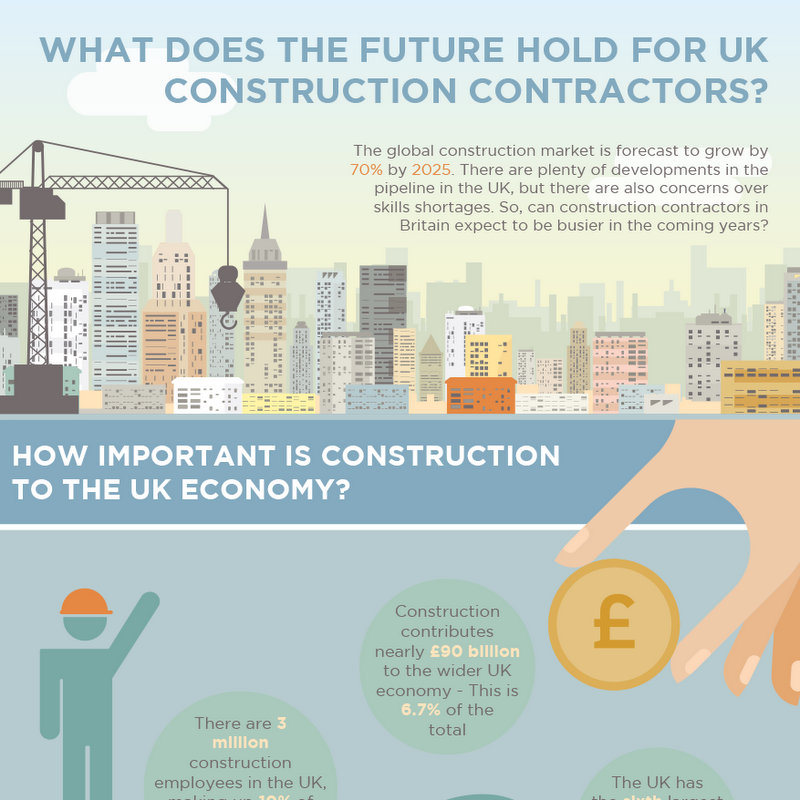 What’s in store for construction contractors in 2015 and beyond?

Construction growth has slowed slightly in the past month or so, which is not uncommon at this time of year, but that doesn’t detract from the fact that the industry has had a very impressive 2014.

But what lies ahead for building contractors in the New Year and beyond?

This new infographic produced by Quantic UK shows that the demand for skilled construction professionals is likely to soar in 2015, as a plethora of exciting projects are due to get underway.

The nation’s construction industry output is expected to grow by 4% next year and 3% in 2016, according to Experian, while Glenigan predicts that overall project starts will be up by 7.3% in 2015.

Have we got the skills?

All of this is obviously very encouraging for the UK’s construction contractors, but unfortunately it seems that the number of skilled builders operating in the UK has fallen sharply in recent years.

Business Secretary Vince Cable warned in July this year that the industry has lost as many as 350,000 people since the financial crisis, and it’s vital that companies introduce apprenticeship schemes in order to create a new generation of construction experts.

As the infographic suggests, skills shortages are a real concern.

One figure that stands out in particular is that 71% of Royal Institution of Chartered Surveyors members believe a shortage of qualified bricklayers will hinder wider progress in the building sector.

Since the infographic was published, BBC News has reported that construction firms are attempting to counterbalance the lack of brickies by bringing workers in from overseas.

Research undertaken by ManpowerGroup suggests that Portuguese bricklayers are being paid up to £1,000 a week in the UK, while one in three large construction companies in London have decided not to bid for new contracts because they don’t have enough depth in their workforce.

This ties in with a recent report by the London Chamber of Commerce & Industry and KPMG, which found that 20% more workers will be needed to deliver £96 billion worth of projects in London and the South East between 2014 and 2017.

The same report also warned that a 51% upturn in training provision would be required to meet the demand for skilled labour in this part of the world.

This only serves to back claims made by Mr Cable that the UK needs to play the long game and ensure enough young construction industry talent is being nurtured.

Opportunities are there for the taking

Despite the fact so many southern firms have seemingly been forced to pull out of the running for contracts, there are still plenty of high-profile developments slated to start in the next few years.

Whether it’s the monstrous High Speed 2 rail line – which should start in 2017 – or the growing number of energy, road and housing projects that are being launched, there has arguably never been a better opportunity for UK-based construction professionals to make some serious money and secure a pipeline of continuous work for the foreseeable future.

Buildingtalk JOBsearch offers you a free opportunity to search through thousands of current construction and other built environment job vacancies.