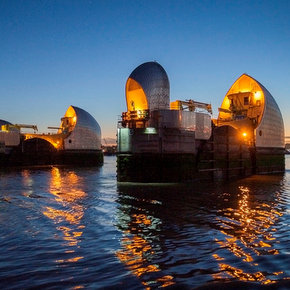 ‘1 in 100 a year’ risk means catastrophic floods every year

Storm Angus, the first of this winter’s storms, dumped a month’s rain in a few hours and submerged cars in Bristol. Thousands of homes were inundated. Travel was disrupted. Flood protection and prevention are back on the political agenda.

If it feels like the climate change debate is being overtaken by events, it is. Sixteen of the 17 hottest years since measurement started in 1880 have been since 2000. This year is the hottest. Artic regions are heating up twice as fast as the rest of the world.

Flooding is one of top climate change risks

This ought to spur us into action, but our attention span is shrinking. We’re becoming blasé about climate change and don’t understand risk. Lord Krebs, a chairman of the Committee on Climate Change says: “We talk about a one-in-a-hundred year risk of catastrophic flooding. But if a hundred places in the country carry that risk, the likelihood is that one of them will flood every year.”

According to Lord Krebs, flooding is one of the top six climate change risks to Britain. Yet Government is reluctant to act on future threats. When floodwaters poured over recently erected flood defences in Carlisle last year, residents accused the Government of investing for yesterday’s floods rather than tomorrow’s flood levels.

Government always has more to do than money to do it. So, ministers tend to leave complicated problems and projects for the next government to deal with. SuDS failed to get implemented in the Flood and Water Management Act 2010, and wasn’t included in this summer’s Housing and Planning Act despite strong protests from the Lords. That gave short term relief to some developers who see SuDS as adding hassle and cost to their projects, but it was bad news for the country and those affected by the growing risk of flooding.

It’s crucial that Government leads on legislation to create the conditions for market demand and continued investment in new products.

The industry needs new standards, regulations and testing methods to drive change, and ensure products and solutions align to the worst case scenarios of climate models. These must then be carried through into building specifications, and implemented without modification in flood-risk areas to create sustainable demand. Everyone needs to understand that, because everyone will be affected.

No one company or organisation has the answer, and this will be a decades-long journey, but we need to start now.

So I’m calling for a construction industry campaign to join me in lobbying Government to take urgent, meaningful and proportionate action.