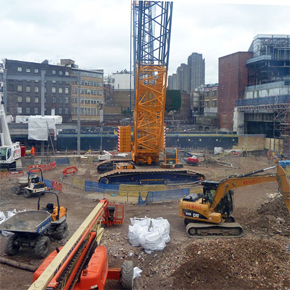 With an election on the horizon, Sean Ofsarnie, Co-Founder and Director of construction chemicals distributor Resapol, discusses why uncertain political developments shouldn’t trouble the construction sector.

Whatever your personal beliefs, there’s no denying that the last few years have been rife with political uncertainty. Since the 2010-2015 coalition government, Britain has seen a General Election and a Referendum, in which it voted to leave the European Union.

This week, Britain is set to go to the polls for the third time in as many years.

With a General Election coming up, and Brexit negotiations rumbling along in the background, we are both unsure of what kind of deal our country will secure, and who the government will be next week.

For political commentators, these are fascinating times that are reshaping the country’s future. However, for some business owners, these are times of anxiety, as they wonder how their business will be affected by political change.

Amid all the doom and gloom, I aim to bring a message of positivity…

Construction is in rude health

The construction industry has little to fear from political uncertainty; it is well placed to thrive, regardless of the political situation.

Within the industry, the uncertainty caused by General Elections and referenda can introduce significant delays to decision making processes. The industry may seem busy right now but, generally speaking, that is because the work carried out had been planned many years prior.

Planning decisions still need to be made today, so don’t allow the uncertainty of political situations put you off from making necessary decisions.

Ultimately, the current state of housing, transport and infrastructure means that the construction industry won’t struggle for work in the coming years.

The ongoing housing crisis means that housebuilding is on the rise, with the construction of thousands of new houses fast becoming a practical necessity. Regardless of the political situation in Westminster and Brussels, the growing demand for new homes will ensure that the construction sector has plenty to do for years to come.

On top of this, the country’s road and rail networks are in dire need of an overhaul. With Britain’s roads crumbling, and a consistent lack of investment in the railways leaving the network antiquated, the construction industry has plenty to get its teeth stuck into moving forward.

If you spend all day worrying about the fact that Britain is on its way out of the EU, you’ll never get anything done. Instead of worrying about the impact of politics on your business, deal with actual events as and when they become relevant.

When it comes to a change of government, the reality is that businesses probably won’t be affected until the Chancellor reveals his budget.

So, on budget day, make sure you’re actively engaged. But on almost any other day? Put politics out of your mind and stay positive.

A negative attitude could have a crippling impact on your business. Not only will you fail to get your own work done, but a defeatist approach will rub off on your staff and reduce productivity across the board.

It may seem like an obvious thing to say, but the importance of ensuring that your company is working hard, while all pulling in the same direction, cannot be overstated. To achieve anything as a company, you need to have a united attitude and approach, regardless of Britain’s political climate.

As a business owner, you may have anxieties about the direction the country is going in, but if you work hard, stay positive, and remember that our industry will always have work to do, there’s no reason why you won’t be able to achieve your business goals.

Outside factors will affect your business but, for the most part, it’s all down to you.