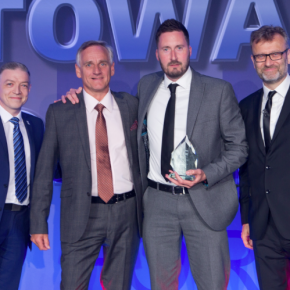 Wienerberger named Brick Supplier of the Year at Fortis Awards

Wienerberger recently scooped the Fortis Brick Supplier of the Year 2017 award at the merchant group’s 2018 Building and Timber Conference in Birmingham.

The biannual conference was attended by both merchants and suppliers who also participated in Meet the Merchant networking sessions.

The awards dinner, which was held on 21st May this year at the Hilton Birmingham Metropole hotel, was hosted by writer and comedian Hugh Dennis, star of Mock the Week and Outnumbered.

“We’re delighted to receive this award, especially as it is voted for by Fortis members who we are committed to building relationships with,” said Nick.

“This award demonstrates our strong position within the industry and the independent merchant sector. Thank you to everyone who voted for us.”

This is the second time Wienerberger has won Brick Supplier of the Year, having bagged the same accolade at the 2016 Fortis conference.