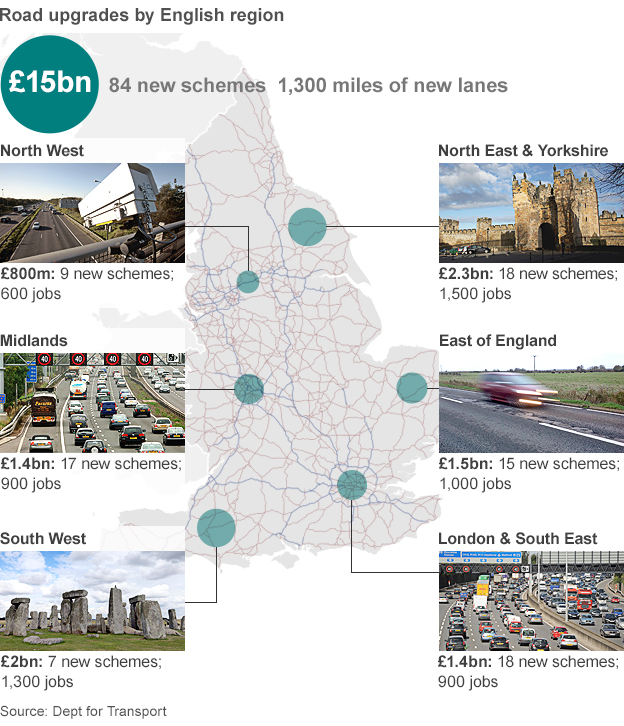 Will the andpound;15bn to be spent on a ‘roads revolution’ for England be money well spent?

As part of a andpound;15bn roads revolution for England, a tunnel is to be built under Stonehenge as part of improvements to the the A303. This is just the headline grabber among dozens of new road plan announced by the government, Transport Secretary Patrick McLoughlin says our roads key to our nations prosperity and bemoans the long term under-investment.

The andpound;15bn was initially announced in 2013 and includes nearly 100 road improvement schemes and will add 1,300 new miles of extra lanes to motorways and A roads. Is this a good use of scarce resources or a great investment in the future of UKplc?

Below is a the BBCs comment and analysis which offers a good overview of the proposal. Paul Fleetham at Lafarge Tarmac also offers his view – see below – and we invite you to email your comments to Buildingtalk.

Among the major plans are:

Paul Fleetham at Lafarge Tarmac comment [1/12/2014] to Buildingtalk about the importance of ensuring the programme is underpinned by well maintained local roads, integrated delivery and a strategic approach.

Big ticket projects and major infrastructure spending initiatives must be underpinned by well-maintained local roads, which account for 98 per cent of the UKs highways network. Delivering both in an integrated way is vital to the long term efficiency and sustainability of our roads, and to supporting the UKs ongoing economic recovery. While the Government undoubtedly faces tough spending decisions, a piecemeal and stop-start funding cycle must be replaced with a strategic approach to pro-actively maintaining and improving our vital road assets.

Terence Greenaway comment 1/12/2014: The cost and disturbing the landscape constructing a tunnel in my opinion is not necessary and cannot be justified. Improvements have been carried out successfully and a screen to prevent drivers slowing up to view the monument is all that is required.

Gareth Walker comment 2/12/2014; Todays announcement on the BBC about the andpound;2.3bn investment in more than 1,400 flood defence projects to protect 300,000 homes that will help prevent andpound;30bn of damage – now that what I call money well spent!.

Brian Berry, Chief Executive of the FMB comment 2/12/14 Given the scale of the housing crisis we face, Im encouraged to see housing considered alongside long term infrastructure planning. It is more pleasing still that housing delivery is being viewed in a much more comprehensive way than we have seen before. As well as announcements on major developments, like a new garden town at Bicester, determination to speed up planning and releasing more public land, there is an equal focus on the importance of small developments in meeting long term housing need.

Government, at a central and local authority level, can fall into the trap of being excessively focused on large projects, at the risk of ignoring the enormous cumulative capacity of small sites to deliver new housing. One of the major barriers which small house builders face in bringing forward small developments is the disproportionate cost and complexity which the planning process tends to inflict on minor applications.

The publication of data which will ensure greater transparency around processing times for minor development applications is an important step in maintaining focus on smaller sites. A commitment to looking at how to better support the approval of more small sites is also an extremely welcome statement and we look forward to engaging with government on this issue. If the Government continues to take this comprehensive approach to delivering new housing, we stand a good chance of starting to meet the demand for new homes.

The National Infrastructure Plan 2014 clearly outlines what opportunities are out there; when investment will be required and what mechanisms will be utilised. The report correctly highlights that the financing market has improved markedly although the scale and risk of certain projects remain a challenge. It is clear that energy will demand the lions share of investment, and now the challenge is ensuring the right support packages are implemented to finance and fund the necessary generation capacity to ensure the lights do not go out.