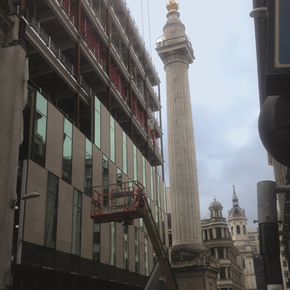 London’s Monument Building is the latest project to employ Bull Products’ Cygnus wireless alarm system, which has been designed for use during works on construction sites.

Comprising 94,000 square feet of office accommodation and retail space, the Monument Building is Skanska’s latest development. The building, which was conceived by architect Ken Shuttleworth’s Make, has been designed to achieve a BREEAM ‘Excellent’ rating.

The Cygnus system has been developed for use in dense concrete and steel structured buildings. It is able to function in areas where other radio frequencies are operating, without its connection range being affected.

It can also run on different site addresses to ensure that systems on multiple sites are kept separate and free from interference. 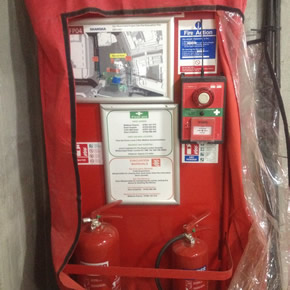 This feature attracted Skanska to the system; it allows the company’s health and safety team to quickly identify where help is needed on site.

For instance, if an operator hits the first aid button on level 7, the team knows exactly where to send medical assistance.

Crane drivers are also able to hit emergency buttons, to alert the team if they are injured or unwell.

The Cygnus system can be reused on future construction projects, which also appealed to Skanska.

Cygnus features an optional control panel, which offers an event log function. This works to record alarm activation, low battery warning and signal faults, which can be viewed in a history folder held on the panel.

Each of the system’s units are equipped to provide the panel with information at regular intervals; dubbed as the ‘heart beat’, this message confirms the battery status of each device and whether it is still present. It is monitored closely by the control panel.

As well as possessing the ability to test all units, the system has an evacuate function, which acts as a call point to the alarm units.

A PIR option, which can detect intruders and alert off-site personnel, can also be included for additional safety protection.