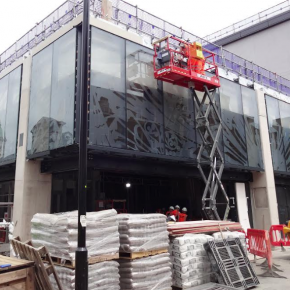 As part of Crossrail’s Art Programme, British artist Simon Periton designed an artwork for the curtain walling featuring an intricate pattern that reflects the elaborate Victorian metalwork of the historic Smithfield Market directly opposite. 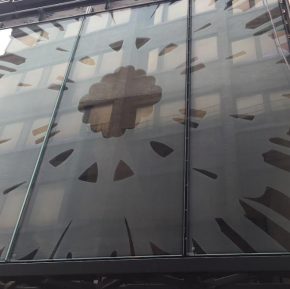 During the day, the artwork will allow passengers to see inside to the coffered ceiling that echoes the Brutalist architecture of the nearby Barbican, whilst changing shadows will be cast across the interior space.

In the evening, the station lights will illuminate the design from inside, offering a dramatic new perspective to those on the nearby streets.

Wrightstyle is currently working on seven out of the 40 stations on the Elizabeth line, including Bond Street, Paddington, Farringdon, Liverpool Street, Whitechapel and Woolwich. The new Farringdon station is expected to serve 82,000 passengers every working day.

Specialist glass from Hero Glass was chosen for the project “which pushed the capabilities of normal glass design, but which also successfully fuses art and architecture in this remarkable building,” according to Lee Coates, UK director, Hero Glass.

The glass panel artwork was created using a silk screen print process in Hero’s factory which gave the visual result the artist was looking for. Wrightstyle’s glazing systems offer great durability and protection, having live tested its systems against both car and lorry bomb attack, using up to 500kg of TNT-equivalent high explosive.

“Crossrail is the largest construction project in Europe and passenger safety is, of course, the paramount concern of the design team,” said Wrightstyle contracts manager, John Woodcock.