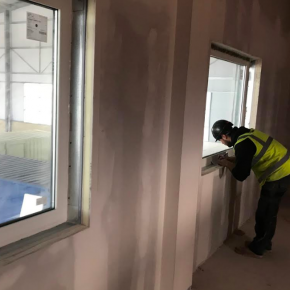 The new purpose-built 13,000 square foot training centre features the very latest aircraft, top-of-the-range flight simulators and other equipment to train the next generation of commercial pilots.

The fire resistant windows appear in new offices that look out into a main hangar, hence why fire resistance protection was vital. 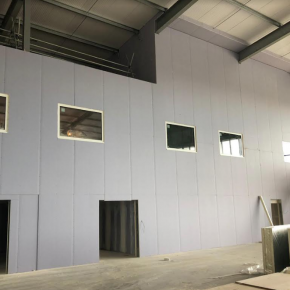 Apart from flight training, Gloucestershire Airport offers flights to Jersey and the Isle of Man, and a range of charter and other services.

Wrightstyle comprehensive range of internal and external glazed systems includes curtain walling, windows, partitions and doors, offering integrity only or integrity and insulation for up to 120 minutes.

The company’s advanced systems have also been successfully live tested against both car and lorry bomb attack, yet can incorporate slim sightlines and absolute aesthetics.

Wrightstyle has become a trusted supplier to airport and other transport infrastructure projects, working at Luton Airport, Crossrail and King’s Cross rail projects, and internationally in Dubai and Hong Kong.

Wrightstyle’s customer for the Skyborne was contractor Mildren Construction of Christchurch, and the windows were installed by Wrightstyle’s approved installer, Structural Systems Cardiff Ltd.

John Woodock, Wrightstyle’s contracts manager, commented: “It was a pleasure working on this project as everything fell into place, with the whole job going like clockwork.”