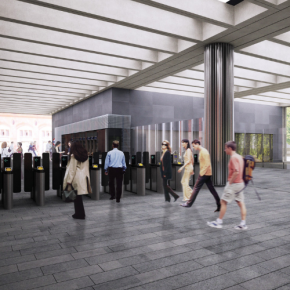 Having supplied systems for transportation projects in Hong Kong, Dubai and the UK, and currently working on six Crossrail stations, the steel and aluminium glazing company understands the importance of railway station fire safety.

The final Crossrail element will be at Paddington station for which Wrightstyle are currently fabricating bonded doors and screens. Wrightstyle also supplied a range of fire-rated doors, screens and curtain walling to Bond Street, Farringdon, Liverpool Street, Whitechapel and Woolwich stations.

The line is expected to increase London’s rail capacity by 10% when it is fully operational – perhaps at the end of this year. The Elizabeth Line will have 40 stations, including ten new stations, with up to 24 trains running each hour in both directions on its 100km route.

The fire safety measures being installed on the Elizabeth Line are state-of-the-art, reflecting modern fire safety regulations and advances in building materials – including Wrightstyle’s own fire systems.

Jane explains: “Railway stations are mercifully rare – and that, more than anything, speaks volumes for how far fire safety has progressed over recent years.

“The last major railway station fire in the UK was at Nottingham in January last year, causing significant disruption and a repair bill of at least £2 million. It’s believed that the fire was started deliberately.

“Also last year, trains caught fire while at Plymouth and Grantham stations, similar incidents to others recently at London’s Victoria station and at Sevenoaks in Kent.

“In each incident, the station was evacuated, the fire contained, and nobody was hurt. But not all station fires have happy endings. The worst modern station fire disaster, in 2003, was at Daegu Station in South Korea in which 192 people died.

“Of particular concern was how badly the station’s fire compartmentation systems were designed. Instead of containing the fire, but allowing people to escape, the system closed fire shutters and smoke barriers – effectively concentrating the heat into places from which people were desperately trying to escape.

“It was a reminder of the King’s Cross disaster which fire claimed the lives of 31 people in 1987, and which was probably started by a discarded match or dropped cigarette on an escalator, underlining how most major accidental fires start from something almost insignificant.

“All Wrightstyle systems are tested as one compatible unit and, as we always emphasise to architects and designers, based on our extensive fire, ballistic and bomb testing experience, the glass and steel components should always be specified as one integrated and tested assembly.

“The glass will only be as good as its framing system, or vice versa, and if one fails, both fail, with potentially catastrophic consequences.”

Therefore, the importance of a good framing system should not be overlooked in the fire safety of transportation projects.