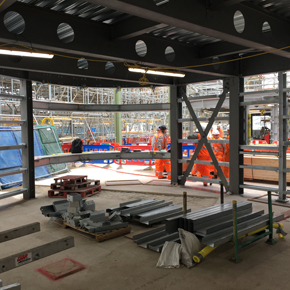 Wrightstyle, one of the UK’s leading suppliers of advanced glazing systems, has provided a range of systems for five new Crossrail stations.

The Devizes-based company are supplying to Bond Street, Farringdon, Liverpool Street, Whitechapel and Woolwich stations, on what will become the Elizabeth line.

In Whitechapel station, which is shown in the image at the top of the article, Wrightstyle has been contracted to fabricate, supply and install a range of curtain wall screens for the station’s new ticket hall on its mezzanine level.

“Crossrail is the largest construction project in Europe and has been designed to provide passengers with the safest-possible travelling environment,” said John Woodcock, contracts manager, Wrightstyle.

“That’s why our systems have been specified across the new line because we have enormous experience in the sector, and our international testing regime provides absolute assurance on the strength and compatibility of both our glazed and framing components,” he said.

The tests referred to are ones that guarantee it’s systems mitigate against both car and lorry bomb attacks.

The line is expected to fully open at the end of 2018 and will increase London’s rail capacity by 10% when it is fully operational.

The £14.8 billion Elizabeth Line will have 40 stations, including ten new stations, with up to 24 trains running each hour in both directions on its 100 kilometre route.

This transportation project features in a long line that Wrightstyle have undertook, with other recent ones including a major railway hub in Hong Kong and the iconic frontage of London’s King’s Cross station.

Whilst no one could have predicted the tumultuous events of 2020, one milestone that was always going to be in the calendar was Freefoam Building Products reaching 30 years in business.

Contour understands the challenges that hospitals are faced with when looking for LST radiators, Anti-ligature radiators and the radiator covers, with the priority being the safety and wellbeing of patients by creating an environment they feel comfortable in.

The new Tottenham Hotspur Stadium has become one of the more renowned and iconic spaces to have benefitted from Alumasc WMS’ expertise, receiving the full ‘rain to drain’ treatment.