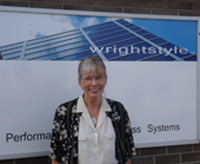 As a British steel and aluminium glazing specialist, Wrightstyle’s image has given it an advantage in the global market, where global awareness influences purchasing decisions by impacting on the ways in which consumers think.

With global demand for flat glass set to rise by over 8.5% per year, Wrightstyle supplies its fire-rated glazing systems internationally, competing with other national and international glass manufacturers that have increased their production to meet the demand.

There are sixteen countries making flat glass in the European Union and China’s flat glass lines are expanding.

However, advanced glazing systems that can protect against fire or bomb attacks are valued on a global basis.

This distances Wrightstyle from other manufacturers, as the company’s integrated glazing systems have been designed to deal with such threats.

Wrightstyle has also recognised the need to put the right glass into the appropriate framing system in order to amplify its security properties.

Wrightstyle’s internal and external advanced glazing systems have been specified worldwide to stand up to typhoon weather conditions, bomb threats and fire.

The glazing systems have also been accredited for use in the USA, having passed the infamous hose stream test amongst others.