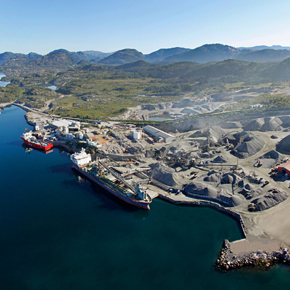 Yeoman Halsvik, a subsidiary of Aggregate Industries, has helped stabilise the wreck of a German World War II submarine outside of the island of Fedjie on the west coast of Norway. 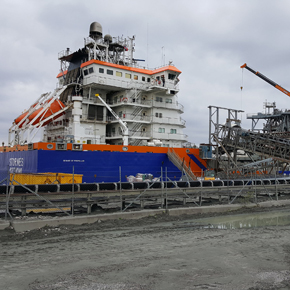 The U-864 submarine was sunk by the British in 1945 whilst transporting a large quantity of mercy to Japan. The submarine was attacked by a British torpedo which divided U-864 into sections which sunk to a depth of 145 to 160 metres.

The Royal Norwegian Navy found submarine’s remains in March 2003, where it was discovered that the mercury had been seeping out of rusted containers and contaminating the region and sea life.

In light of the discovery, the Norwegian government has been extensively assessing the situation to try and stabilise the wreckage and contain the toxic mercury. Eventually, it was decided that ‘entombing’ the wreckage under a layer of sand and gravel would be the safest and most effective option for stabilisation and the Norwegian Coastal Administration awarded the contract to Van Oord at the end of 2015.

Yeoman Halsvik  was enlisted by Van Oord to provide a specialist sand that would seal off the existing seabed to prevent the future release of mercury. The company also supplied Sub base and Offshore material from its quarry based at the Port of Slovag on the West coast of Norway. 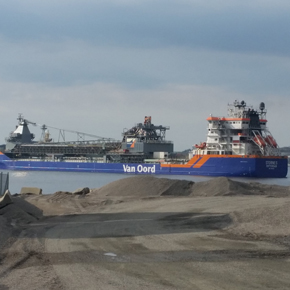 Van Oord implemented a thorough quality control procedure to monitor the spreading, ensuring there would be no risk of seabed contamination during the installation process.

Van Oord built a foundation of more than 35,000 tonnes of specialist sand and 160,000 tonnes of stone at a working depth of 150 metres – guaranteeing the stability of the seabed slope whilst ensuring that surrounding sediments would not slide off.

A special installation method was developed for the placement of the sand, in order to minimise the disturbance of the seabed. As the exact volumes were not known and the installation time was relatively short, Yeoman Halsvik needed to ensure good production capacity and quick loading of the vessels.