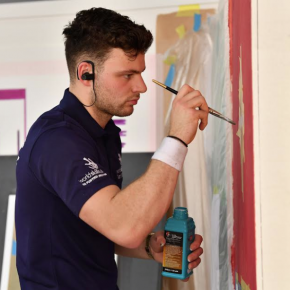 A young painter and decorator from the UK took part in the WorldSkills Finals in Abu Dhabi, winning a Medallion of Excellence.

Team UK finished 10th with no less than 20 medals, one gold, three silver, three bronze and 13 medallions of excellence.

22 year-old Jordan Charters won his place in Team UK after a great performance in the Crown Trade Apprentice Decorator of the Year contest, in association with SkillBuild, in 2015.

Jordan was one of 34  young apprentices to complete 4 days of competition at the 44th WorldSkills Finals in October, following regional heats, a national final, a Team UK selection process and months of training.

“What Jordan has achieved is phenomenal and it illustrates the value of Crown Trade Apprentice Decorator of the Year, which is the only competition associated with a national body, the CITB and the only one which gives the painting and decorating industry a route to WorldSkills.

“It has been organised and sponsored by Crown Trade for 28 years and we feel very passionately about it after ally his time and really prod of those taking part.”