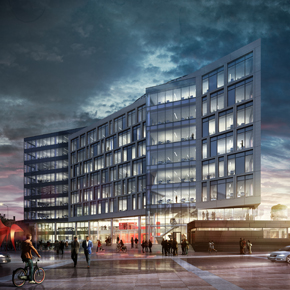 Last month, the editors from ABC+D were invited to Cardiff by precast concrete provider, Sterling Services and architect Rio, to take a look at the stunning One Central Square building – Phase 1 of Foster + Partners’ Central Square redevelopment scheme…

Cardiff’s Central Square aspires to become the gateway to the capital of Wales, acting to consolidate the business district and link it to the city’s transport hub.

One Central Square sees the commitment of the developers to deliver premium office space, raising the bar within the city and attracting Grade A employers to Cardiff. 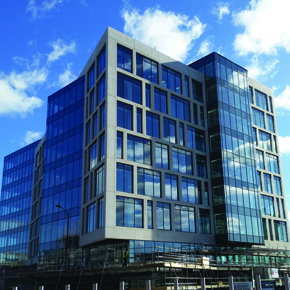 “In order to create a random appearance to the modular façades, three different sized modules (1.5, 3 and 4.5m) were produced that could be randomly positioned…

The building frontage is orientated to create a boulevard that connects Central Square to Millennium Walk, which provides a new direct pedestrian route from Cardiff Central train station to the Millennium Stadium. This frontage is eroded to create a raised semi-public podium between the boulevard and the entrance façade that connects the public realm and the building.

Architect Rio’s concept involved wrapping the building in a combination of precast concrete and glass. Given the site constraints and rapid programme requirements, together with the wish to create flexible space on a 1.5m planning grid, off-site fabrication and modularisation of the façade was vital.

Simplicity was important to Rio which worked closely with Sterling Services to develop a modular precast solution that enabled the realisation of the concept design through Sterling’s specialist knowledge of precast design, construction, logistics and installation.

In order to create a random appearance to the modular façades, three different sized modules (1.5, 3 and 4.5m) were produced that could be randomly positioned within the rectangular framework of each façade. Each module was carefully designed to create an opening for the installation of the modular, full-height aluminium framed windows. Sterling was also called upon to create non-standard precast units for more complicated areas of detailing and linking them with other aspects of the fabric. 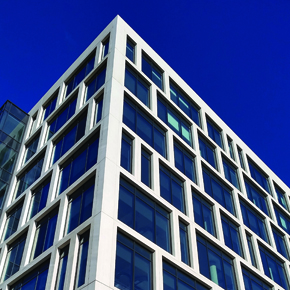 At the launch of the project, Rio’s team was given a detailed tour of Sterling’s manufacturing facility in Taunton, Somerset where each stage of the process was viewed and explained in detail. A full-sized mock up panel, based on Rio’s requirements was produced which enabled the teams to discuss the finish, test silicone sample colours and assess potential curtain walling colours and glass samples.

Rightacres Property Company appointed Rio in 2013. From concept to completion has taken just over two years, with the building being completed in March 2016. With such an exposed and windy location, an estimated 25% downtime was factored in. However, in reality, this amounted to only 10%.

The building has achieved a BREEAM rating of Excellent, receiving six credits under the energy section, aided by the installation of PV units to cover the roof, energy efficient lighting and solar controlled glass.

Creating a wonderful working environment with 360° views over the city and Cardiff Bay, the building plan is based on a typical traditional B1 office layout and provides a net area of circa 135,000ft². A central core containing lifts, stairs and toilet facilities provides the primary vertical link through each building level:

The envelope to the building’s concrete structural frame has a ceramic granite-clad base that overlooks the street boulevard and grounds the design. A fully-glazed element separates the base from the precast concrete-clad office space above, which provides transparency and animation to the public realm interface.

The top two floors have already been pre-let to Blake Morgan Solicitors.