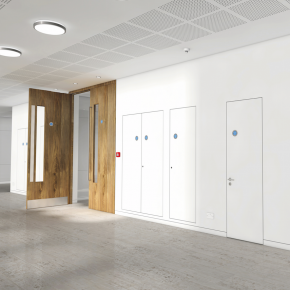 Aspex has recently secured a contract for its Novista Riser Timber Doorsets to feature at Chelsea Barracks, a luxury residential development in Westminster.

A leading company in the UK for architectural ironmongery and doorsets, Aspex’s products will feature throughout the £3 billion project, including in townhouses and penthouses.

The Novista Riser is designed to help blend access and riser doors into the adjoining wall, making them pretty much invisible with no architrave.

This system is also available with a conventional three-sided frame, which can be used for doors such as cleaners’ cupboards and stores, allowing them to blend in with the wall.

“They can be assembled in a matter of minutes using our unique connecting system, and once assembled, they provide a rigid frame which is ready for installation into the wall,” she said.

“Our doorsets are an ideal solution for this project as they will create a minimalistic and contemporary look and feel which will blend into the surroundings. We’re delighted to be supplying our door risers to such an exciting project.”