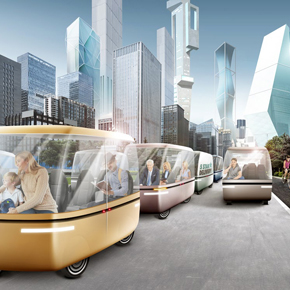 Back to the Future of Construction: Space ports, exoskeletons and virtual reality

To celebrate the 30th anniversary of Back to the Future, futurologist Ian Pearson has taken a trip a further 30 years down the line to predict what the world of construction may look like in 2045. 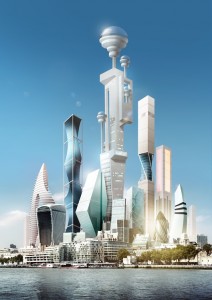 London’s future skyline: A London Spaceport is likely by 2045 as the space industry explodes.

Manufactured using ultra-strong, carbon-based materials, his report predicts that buildings will utilise advanced AI to adopt their very own personalities.

‘Smart buildings’ will collect and process sensor data, and help maintain all the various infrastructure and human comfort systems within the structure.

Advances in 3D printing will allow for the rapid construction of basic structures, and the extensive use of carbon nanotubes and graphene to reinforce building materials will enable stronger, lighter and taller buildings.

The tallest skyscrapers – up to 30 km tall – will act as mini-cities, many of which will house their very own space ports as space travel becomes a popular method of transportation.

As the use of augmented reality becomes more widespread, Ian suggests that it will greatly impact the visual appearance of our surroundings.

By 2045 we could see most buildings become windowless, instead featuring a simple planar surface, with more intricate details projected through the use of augmented reality. This way a cheap building can appear exactly the same in AR as an expensive one.

Virtual reality will also introduce marketing campaigns, artificial plants and animals into our surroundings to stimulate the visual environment.

Half human, half machine

The report speculates that most construction work will be completed with the use of super-strength exoskeletons. 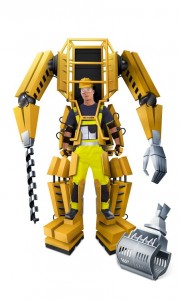 The heavy machines will work with a variety of attachments, including shape shifting technologies to help cut through materials, making cleaner edges and surfaces.

Augmented reality will also be utilised to allow the builders to see exactly where things should go and what the finished project is meant to look like to ensure the job is completed properly.

Self-driving cars, similar to those currently being developed by Google, will be used universally by 2045 and almost entirely fleet managed, with private ownership rendered obsolete.

Vehicles, or ‘pods’, will be developed with the ability to share energy preserves, reducing their environmental impact and the need for external power sources.

Back to the Future

Ian’s report concludes by suggesting that construction in 2045 will still share many of the same goals the industry faces today. Whilst automation and robots will be the biggest changes, the continued development of 3D printing and augmented reality will also have a significant effect on the way the industry operates.

Whilst we’re still waiting on some of the things promised in Back to the Future, the 2045: Constructing the Future report gives us plenty more to look forward to in the next three decades of construction.