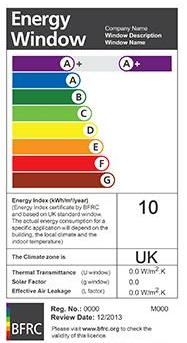 There is no scheme in the UK that rates glass in isolation. All WER schemes operate in an identical way – rating the whole window including glass, frames, spacer bars and gaskets. It is not possible under current European Regulations to provide an energy rating for glass in isolation from the other window components. Whilst it is true that certain glazing specifications are widely used in A’ and A ‘ rated windows, the glazing itself does not guarantee an A’ or A ‘ rating for the whole window. The frame system also has to be thermally efficient to enable the complete window to obtain a favourable rating.Claims of A-rated glass’ and the like are obviously designed to give the impression that the window itself is A’ or A ‘ rated, which is misleading.

BFRC managing director Chris Mayne: BFRC’s wants to correct erroneous claims regarding window and door energy ratings. When such misleading claims are used in marketing then Trading Standards and the Advertising Standards Authority can get involved.

Trading Standards spokesperson explains:An advertising claim that a type of glass is A energy rated is likely to breach the Business Protection from Misleading Marketing Regulations 2008 (and / or Consumer Protection from Unfair Trading 2008) if, as BFRC has outlined, the claim is meaningless in relation to glass but is likely to be understood as indicating a more energy-efficient product than other types of glass. An offence under the Regulations can attract a £5,000 fine if heard in magistrates’ court, or an unlimited fine and/or 2 years’imprisonment if heard at crown court. Enforcement is by local authority trading standards officers.

Misleading advertising is described as material that in any way, including its presentation, deceives or is likely to deceive the traders to whom it is addressed or whom it reaches; and by reason of its deceptive nature, is likely to affect their economic behaviour; or, for those reasons, injures or is likely to injure a competitor.

Matt Wilson, Communications & Marketing Manager from the Advertising Standards Authority (ASA): The ASA is reminding advertisers in the glazing sector of the importance of ensuring their ad claims can be substantiated and don’t mislead. Misleading ads give an unfair advantage to businesses who don’t play by the rules, they also erode consumer trust. Having your ad investigated and subsequently banned by the ASA can be time consuming and costly as well as damaging your reputation. We urge advertisers to seek free, expert advice from the Committee of Advertising Practice on how to stick to the rules and avoid misleading would be customers,

BFRC (British Fenestration Rating Council) is available to advise glazing businesses on any aspects of window and door energy ratings and how they can be correctly described.

The BFRC is the UK’s national system for rating Energy Efficient Windows and you will find everything you need to know about the ratings and the label on their website via the link below.