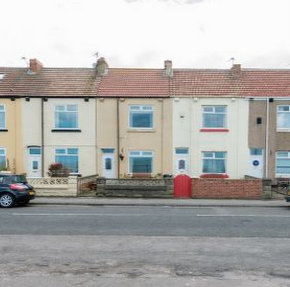 Howard Chapman, Buildingtalk Editor, reflects on today’s report from the Joseph Rowntree Foundation about record in-work poverty and a chronic housing crisis, and asks why we can’t build more homes for affordable rent. Is it a practical problem or a political one?

Record employment with record poverty is not economic growth

There is a reported £30 billion worth of demand in the UK’s build-to-rent sector and 7m people, mainly from working families, in poverty due to high rents. So why can’t we get more homes built for affordable rents? Is it a practical problem or a political one?

If there was truly a desire to create more affordable housing for rent to enable poor working people to escape crippling poverty, then it could be done. It has been before, even in my lifetime, with literally hundreds of thousands of homes built for rent in the 70’s.

Today the Joseph Rowntree Foundation (JRF), an independent organisation working to inspire social change, has published their Monitoring Poverty and Social Exclusion 2016 report (MPSE) showing that in-work poverty has hit a record high as the housing crisis fuels insecurity and exorbitant and unsustainable rents. One in every eight workers in the UK – 3.8 million people – are now living in poverty

The number of people living in poverty in the Private Rental Sector (PRS) has doubled in a decade. Almost three quarters of these people pay more than a third of their income in rent. 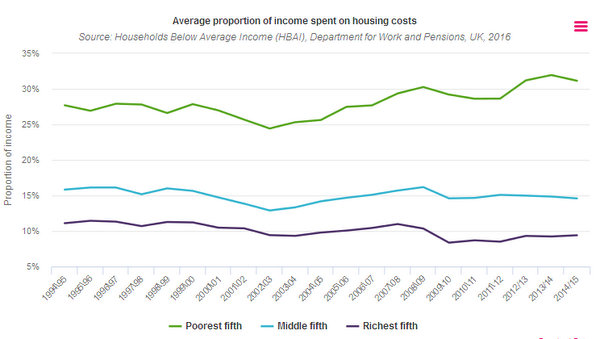 The government point to the good news about economic growth and employment that they believe has helped to avoid poverty rates rising even higher. The employment rate is at the highest level ever, at 74.5%, whilst unemployment has fallen to the lowest since 2007. The number of children living in a workless household has continued to fall and is now at the lowest figure on record.

However, even Mark Carney, the governor of the Bank, recognises that record employment with record poverty is not economic growth and he says Britain is facing “a lost decade” of stagnant incomes where people in work were no better off than before the financial crisis. Today’s JFR report reveals that what is called “in-work poverty” is at record levels, despite these millions of people working hard for not very much pay and turning much of it over to private landlords.

To reduce poverty, JRF is calling for the Government to cut costs for renters and build more homes by investing £1.1 billion extra a year in affordable housing through a Living Rents scheme. This would deliver 80,0000 genuinely affordable homes each year. We could link social rents to local wages, making them genuinely affordable to people earning the National Living Wage, and cut the Housing Benefit bill in the long term.

Another recent report from real estate services firm JLL highlights the requirement and value of the build-to-rent sector in the UK. Experts predict there is pent-up demand worth £30 billion for purpose-built rental accommodation. The chronic shortage of affordable homes for rent must eventually boost development and investment activity. However, government backing for build-to-rent is vital if significant progress is to be made.

I believe we also need to encourage a new generation of housing entrepreneurs. In the 19th century we had Edward Guinness (now homes for 120,000 people) and George Peabody (now homes for 70,000 people). Housing is a vital part of the nations’ infrastructure. If Richard Branson can create a railway, maybe he could build homes for the working poor?

The government could help by making land available at a reasonable cost to rather than just making the big house builders or city investors even richer.

Our Prime Minister, Theresa May has spoken of an economy that “works for all”. This means fewer people suffering in-work poverty through paying high rents.

Let’s get on and build more homes – that’s ‘one nation’ politics.