Blogs » A Newt Build? What construction companies need to know about advanced tests for newts 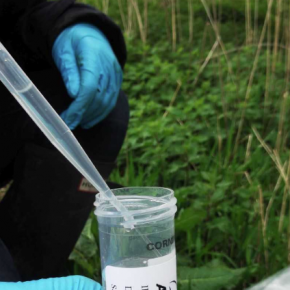 A Newt Build? What construction companies need to know about advanced tests for newts

ADAS, the UK’s largest independent agricultural and environmental consultancy, has taken a look at the newt testing situation, and how it affects builders and developers, as the season for testing for Great Crested Newts (GCNs) has now started.

The season for testing for Great Crested Newts (GCNs) has now begun and, as construction industry professionals know, accurate testing for this protected species is essential. Finding GCN on site after building works have started can mean significant delays and increased costs.

The newts are often hard to spot at the planning and assessment stage; traditionally ecologists needed to go out and shine torches into ponds at dusk to ascertain GCN populations. But the advent of eDNA analysis, first sanctioned by Natural England in 2014, has been a major improvement, as it’s able to rule out or confirm the presence of GCNs in a pond with a single sampling exercise, and with results from that survey coming back within a time frame as short as two days.

Only ponds with positive eDNA results for GCN then need to be tested using conventional survey methods. Using eDNA analysis is particularly helpful in progressing large infrastructure projects, because eDNA testing can be used up until the end of June; a time when it’s too late to survey using traditional methods.

However, construction companies really do need to check that the ecologists they instruct to do the testing are using reputable laboratories to analyse the eDNA samples. Recent figures from a new eDNA proficiency testing scheme facilitated by Natural England showed that in 2018 only five out of nine laboratories offering the analysis correctly identified all of the test samples sent to them.

Check that your ecologists are using a lab which recently passed this proficiency test (the FAPAS test) to guard against the risk of false positive and false negative results for GCNs. Asking for the laboratories testing results will ensure that the proper procedures are being adhered to, particularly in relation to pipetting techniques. eDNA analysis is accurate in detecting GCN presence or absence even at very low levels, however strict quality measures must be followed to avoid false errors.

eDNA testing really is an invaluable and innovative tool for developers in investigating ecological constraints in the field, and getting the full picture of these results at the design stage, where remediation can be creatively incorporated into a building project. However, it’s very important for the team to correctly interpret how the results relate to local conditions.

For example, GCNs can simply be passing through a construction site, rather than permanently living there. In a situation where newts are transient within the local environment and a positive eDNA result is returned, the ecologist on the project will need to look not just at the results but at how they relate to the site to determine the nature of the GCN population – a process which may require additional surveys – and whether avoidance and remediation measures are actually necessary.

This piece came from Helen Rees, director at ADAS, and James Simpson, associate director of ecology at ADAS. ADAS was involved in peer reviewing the eDNA test methodology.