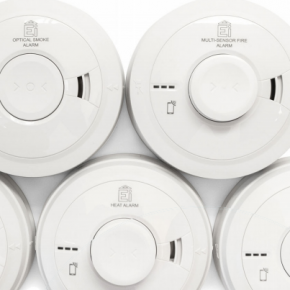 Andy Speake, national technical manager at Aico, explains the changes to smoke alarm legislation in Scotland and discusses the next steps required for the private rental, social housing and privately owned sectors in August’s edition of ABC&D magazine…

This year, the Scottish Government updated its legislation to extend the existing high standard of protection from smoke and fire currently required in private rented housing to all tenures.

Until this point, the specification and installation of Smoke Alarms have been governed by three separate sources: British Standard BS 5839-6:2013, which is a code of practice for the design, installation, commissioning and maintenance of fire detection and fire alarm systems in domestic premises; Building (Scotland) Regulations – Technical Handbook (Domestic) – Fire, which covers new builds, materially altered dwellings, loft conversions, certain building extensions and any work that requires a building warrant and Housing (Scotland) Act – The Repairing Standard, aimed at landlords in the private sector.

Although similar, none of them proffer the same advice or have the same requirements, which leads to confusion.

Grades are the type of alarm system to be fitted. Grade D is the most common for domestic properties and is the minimum requirement under BS 5839-6 and Building (Scotland) Regulations.

Grade D requires one or more interlinked mains powered Smoke Alarms (and Heat Alarms if required), each with an integral stand-by supply.

The backup supply can be from a rechargeable Lithium battery or alkaline battery. Interlinking the alarms is necessary under these two documents.

Interlinking alarms provides an earlier warning for residents and the best chance of escape. When one alarm goes off, all the other alarms on the system activate. Categories are the level of protection afforded by the smoke alarm system.

The categories range from High (Category LD1) through to Minimum (Category LD3) protection. Building (Scotland) Regulations insists on a category minimum of LD2, while BS 5839-6 permits LD2 or LD3 depending on the type of property.

The types of alarms to be used are also at a variance. BS 5839-6 does not specify which to use, although does recommend alarms with tamper-proof batteries for rented accommodation. Building (Scotland) Regulations recommends optical and multi-sensor alarms.

With the change to the legislation, we now have uniformity in Scotland, with the same rules applying to everyone.

What are the new requirements for smoke alarms in Scotland?

The Category of protection has been raised to LD2, which provides medium rather than minimum protection.

– Smoke alarms in rooms frequently used by occupants for general daytime living, such as a living room

– At least one smoke alarm per floor

– A smoke alarm in every circulation space, e.g. hallways and landings

– A heat alarm in every kitchen

– Carbon monoxide alarms where there is a fuel burning appliance or a flue.

The grade of alarm has been extended to allow both grades D and F. Just to recap, Grade D means mains powered alarms, each with an integral stand-by supply (from a rechargeable Lithium or alkaline battery).

As before, all alarms must be interlinked, either through hardwiring or by using wireless interconnection technology.

In the private rental sector this essentially means no change as private landlords should already be complying via The Repairing Standard.

In the social housing sector, the Scottish Social Housing Standard has been updated to reflect these changes.

For privately owned properties, rented out or owner occupied, this legislation is now a minimum standard for safe houses, is a requirement by home insurance companies and forms part of any Home Report.

The approach taken by the Scottish Government is a sensible one in terms of both clarity and protection.

What difference should tenure make to the level of protection provided? Is it right that someone renting in the private sector in theory benefits more than someone living in social housing? Scotland has led the way here and we can only hope that the other nations take note.