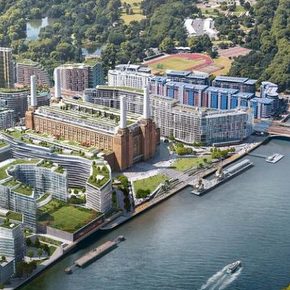 Battersea Power Station to be new London HQ for Apple

Great news that the new Apple HQ is being built just a couple of miles from my home in London as part of the new Battersea Power Station development.  After being left derelect for over 30 years, this iconic brick cathedral will now become a key powerhouse for 21st century technology.

London Mayor, Sadiq Khan, has welcomed the Apple announcement that their new London HQ will be incorporated into the Battersea Power Station development by 2021.

More than 1400 Apple employees will move there from offices around London, enabling them to work together in one stunning location. They have taken enough space for 3,000 employees, giving it room for its operation to expand in London.

Sadiq Khan: “Apple moving into Battersea Power Station‎ is a further sign that London is open to the biggest brands in the world and the leading city for trade and investment.”

The new Battersea Power Station development is the largest mixed-use project in Central London project with planning consent for over 8.5 million square feet of space.

The new Apple HQ will be the largest letting for 20 years in this part of London and they will become the largest employer in the Borough of Wandsworth.

Philip Hammond, Chancellor of the Exchequer: “Apple’s decision further strengthens London’s position as a global technology hub and demonstrates how the UK is at the forefront of the next steps in the tech revolution. It’s another vote of confidence in the UK economy.”