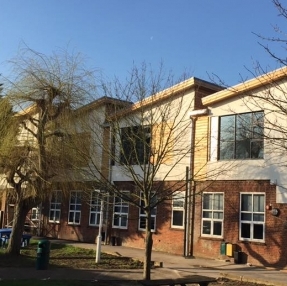 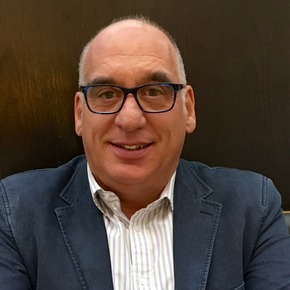 With building space in our towns, cities and countryside becomes ever more premium, Martin Peat, Director, Richardson & Peat, says it is time we stopped thinking of building bigger, and started thinking taller by adding height to existing buildings.

As building space in our towns, cities and countryside becomes ever more premium, perhaps it’s time – in construction terms at least – we stopped thinking big, and started thinking taller.

Erecting buildings on top of existing structures has become more of a ‘thing’ with architects and developers as the 21st century nears its third decade. To the uninitiated, the idea of piling one building on top of another might sound rather clumsy and precarious – like a real-life game of Jenga only far more costly and jeopardised. But for a country with a growing population and diminishing development acreage, building upwards, instead of outwards would appear to make perfect sense. Take, schools, for example. Local authorities nationwide are having to streamline spending budgets to the bone, so there’s little leeway to create new buildings to cope with greater student numbers in line with the expanding populous. Yet a practical, time and cost-effective solution to the “no cash for new classrooms” issue can be found in school grounds across the land.

Education establishments in the UK are probably housing hundreds, if not thousands of flat roof buildings just crying out for a bit of company “up top”. These offer the perfect build-on-build opportunity. The benefits include:

It’s not only schools where this one-up, one-down system can be best exploited. At Richardson & Peat we’ve built new buildings on top of flats and other domestic and commercial buildings, so the opportunity to go one-higher is pretty much everywhere.

The key to build-on-build is guaranteeing the existing structure’s capacity to withstand an extra floor. Some minor engineering may be required to ensure it can cope with areas of overload, but once that’s been decided, the next step is to deal with the transfer structure, involving installing a steel frame to sit on top of the existing building.

Once it’s safely in place, the building project becomes like any other. At this point, it’s worth pointing out – the lighter the frame of the upper building, the easier the build. Lightweight timber frame construction is ideal for build-on-build – the going gets a lot heavier when using brick or slab. With the frame in place, a little remodelling may be required to install the all-important connecting staircase between the buildings. 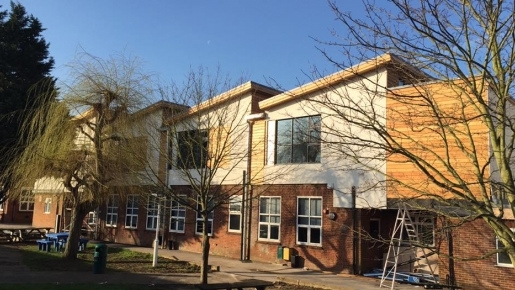 Another process which demands a thorough think-through, is how best to insulate the new-build’s acoustics and prevent potential fire-spread between the buildings. At Hinchley Wood School in Surrey, Richardson & Peat delivered a £1.3 million centre to help autistic children thrive in mainstream school. Due to lack of development space on site, it was constructed on top of an existing school building. In this particular case, we were fortunate to be building on to a concrete substrate which eased the acoustic and fire spread issue. As with all the other similar projects we’ve completed, a crane was used to lift building materials to the upper floor. Schools reluctant to embark on build-on-build schemes cite the potential for long-term disruption to lessons as a reason for opting for more traditional new-build methods. But this is where good planning, engineering and design technique comes into play. With the Hinchley Wood project, we were able to install the transfer structure and complete the majority of major works during the school holiday, which meant little or no disruption during term-time.

And the result? The school has a specialised centre for autistic children which cost less to construct than a new-build and helped preserve the school’s exterior groundfloor space.

In my opinion, these outstanding benefits lead to only one conclusion – build-on-build is the future of UK construction.