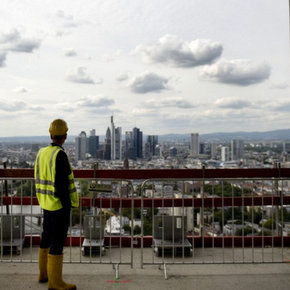 Building sector hit hard by Brexit but it will bounce back

The Telegraph reported yesterday that the FTSE 100 rally stalled as UK construction activity slumped to seven-year low, dragging housebuilders to the bottom of the blue chip index.

Listed housebuilders were hit hard on the London Stock Exchange following the Brexit result. Prices dropped on average 18% on the first Friday and 15% further on Monday. They have rallied a little but are still vulnerable.

Joshua Mahony, IG: “UK construction is truly in the doldrums, if the latest PMI reading is anything to go by. A seven-year low for the construction PMI reading highlights the fact that many firms have seen investment ground to a halt both before and after the Brexit vote. 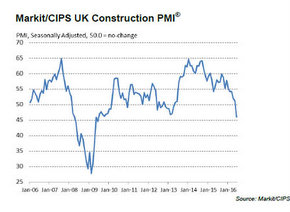 At 46.0 in June, down from 51.2 in May, the seasonally adjusted Markit/CIPS UK Construction Purchasing Managers Index (PMI) dropped below the neutral 50.0 threshold for the first time since April 2013.

The latest reading pointed to the weakest overall performance for exactly seven years, but the rate of contraction was much slower than seen during the 2008/09 downturn.

Howard Archer, IHS:  “The purchasing managers survey points to the construction sector taking a major hit from heightened uncertainty even before the UK voted for Brexit. Not only did the purchasing managers indicate that construction activity was the weakest since June 2006 and contracted markedly, but the survey indicated that further contraction looks inevitable in the near term at least as new orders contracted for a second month running and at the sharpest rate since December 2012. Business expectations were at a three-year low in June, and this was presumably with most of the respondents expecting a vote for the UK to stay in the EU.”

David Noble, Group Chief Executive Officer at Chartered Institute of Procurement & Supply: “The housing sub-sector took the most significant hit, with the biggest fall in activity since December 2012. Commercial building was a close second showing a similarly disappointing result, with a drop in activity not seen since February 2013. Delivery times, employment and crucial supplies were also impacted by the ongoing uncertainty”.

Monika Slowikowska, founder of Golden Houses Developments, one of very few construction companies led by a woman, tells us about her experience of the immediate post-Brexit impact on building material prices and credit.

“The day after Brexit, seven of our building materials suppliers told us they‘d be raising their prices in July – the hikes ranging from three to eight per cent. Then, on the following Monday, while checking the stability of our clients’ funding, we learned that one of our projects is being put on hold. The client’s bank has withdrawn from talks while it analyses the new economic environment. The client contacted 11 other banks and they all said the same thing: no engagement until they know what’s happening in the property market. Banks are refusing to talk to would-be borrowers even where the risk profile is extremely low.

So, we can’t deny that the industry will be hit and many businesses may fail. However, I know our sector will bounce back. If we stay flexible, negotiate well with suppliers and clients, control our costs and become even more efficient, we will overcome these challenges”.

Europe has led the world in improving building standards and the UK has played a key role in developing these. Will that all change now?

Thomas Lane, editor of BDOnline, explained why useful ‘red tape’ will survive. “In terms of legislation, much European legislation is embedded in UK law. For example European sustainability legislation is implemented through building regulations. Changing this would involve rewriting our own regulations. Leaving Europe doesn’t mean chucking away all that work and while there will be some change to regulations much of this will stay the same, particularly if we want to continue trading with the European bloc”.

To support this view, in a Guest Blog on Buildingtalk, Steve Rice, Technical Director at the Glass & Glazing Federation, explained what Brexit means for technical standards in the glass and glazing market. “European standards do ensure a level playing field for ‘glass and glazing’ products and UK companies would not want to return to the days when every country had different standard and system of compliance. We therefore believe it is in everyone’s interest that the present suite of European standards, and those to come, will be embraced by all in the industry. Any likely changes will be several years away”.

A key Brexit casualty may be sustainability. For example, the UK’s energy efficiency policy was being driven by the EU’s Energy Performance of Buildings Directive which requires all new buildings to be nearly zero-energy buildings (NZEB) from 2021. Energy minister Andrea Leadsom (future Prime Minister?) was delighted that the government scrapped its zero-carbon homes policy and Richard Twinn, policy adviser at the UKGBC said: “The government may well not decide to have NZEBs as nothing exists in UK legislation saying it has to meet that target.”