The Chartered Institute of Architectural Technologists (CIAT) has marked 50 years with a Celebratory Luncheon at the Savoy hotel in London. Howard Chapman reports…

The event, which took place on Friday 25 September, saw key members of the built environment sector come together to look back on the Institute’s achievements and towards the future of Architectural Technology.

CIAT’s 2015 Awards winners were also announced at the event. This year, the Award for Excellence in Architectural Technology went to Seaton House by the Harrison Sutton Partnership. This technically advanced beach house made an immediate impression on the judges.

Speeches were made by a number of CIAT members, including the President, the President Elect and two of the Institute’s founding members. 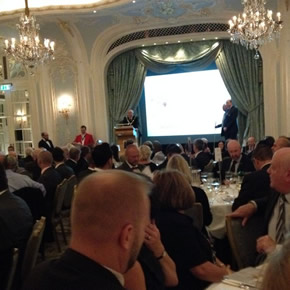 The Celebratory Luncheon took place at the Savoy Hotel

HonDTech’s Chief Executive, Francesca Berriman MBE, said: ‘In growing and gaining its position, its strength is established as a vibrant and progressive body with an enthused and motivated membership who are taking the technology of architecture to the next level, and beyond, into the future. There are exciting times ahead!’

The event was welcomed with messages of support from a number of dignitaries, including HM The Queen. She sent ‘warm good wishes to all concerned for a memorable and successful event’ and the Mayor of London said ‘I hope this event is a fantastic success and would like to take this opportunity to extend my warmest good wishes with all those connected with the Institute.’

One comment on “CIAT celebrates 50 years of architectural technology excellence”