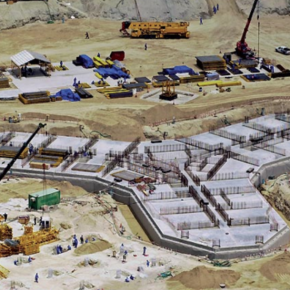 Whilst planning the construction of a building nowadays one of the first considerations are the foundations on which the building will sit. The technology for building foundations has come on leaps and bounds since the Egyptians built their pyramids on solid rocky ground or onto the edges of hills. The discovery of the oldest building foundations ever found in the UK, likely laid some time before work was even started on the Great Pyramids of Egypt, was made on the site of a new housing development in Monmouth in 2013, made up of 3-ft wide tree trunks.

Thankfully the developers used new techniques rather than trying to re-use the ancient footings. All kinds of ideas have been used over the centuries to support buildings including padstones, tree stumps and stilts with varying success, see below for some of the most extreme foundations ever used: 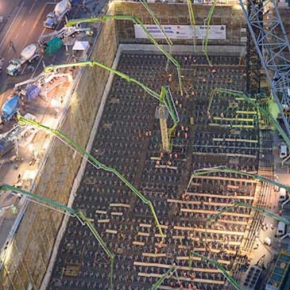 The constructing of the foundations on the Wilshere Grand in 2012 broke the world record for the biggest continual concrete pour with a total of 16,208.2m³ of concrete was used and the incredible achievement took a total of 18 hours. Beginning at 4pm on a Saturday, 208 individual trucks delivered concrete from eight production centres. Nineteen pumps feeding 13 hoses were used to fill the site with well over 37,000,000 kilograms of concrete. With such massive volumes of concrete being used overheating was a real risk and 19 miles of refrigeration pipework and 24 remote sensors were embedded within the concrete to monitor and managed the rate of curing. This was completed and now a 73-story hotel stands upon the massive foundations in the heart of Los Angeles. 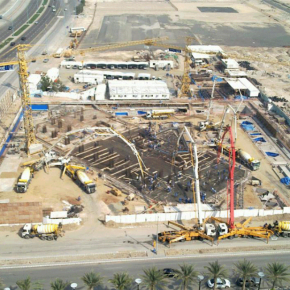 Construction of the Jeddah Tower, also known as Kingdom Tower, is already underway and this building is shrouded in massive secrecy. The final expected height of the tower has not been released and this has been rumoured to be up to a kilometre in height, dwarfing all other buildings in the world. With such height must come stability so the foundations for this mammoth project were just as big, rumoured to have been well over 100 meters deep, laced with 270 piles with diameters ranging from 1.5-1.8m. The raft is probably the world’s largest one-piece reinforced steel foundations with thickness ranging from 4m to 5m. 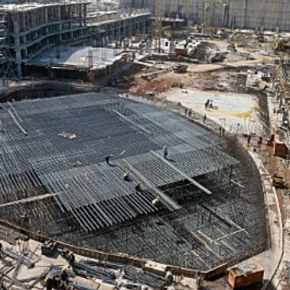 The Petronas Towers were the tallest buildings in the world between 1998 and 2004, towering above everything else in sight at 1,483ft. With such a height (and weight) the foundations for these lofty structures had to be perfect, and they were. 104 concrete piles for each building were bored into the earth by piling contractors and a 4.6 metre-thick concrete raft was poured around them. This took a Malaysian record pour totalling 54 hours of nonstop concrete. Construction of the foundations for the towers took an entire year to complete, longer than some actual high-rise buildings take for the entirety of the work.

There have been some amazing advances in construction in Dubai over the years but the Burj Khalifa is considered to be the pinnacle of building design and construction and this, of course, also applies to the foundations. 110,000 tonnes of concrete were used in the construction of the foundations for the building along with 192 piles drilled down into the desert. 39,000 tonnes of steel rebar supported the foundations in a mammoth of engineering. This all supported a building that has been the tallest building in the world since 2008 with only the Jeddah Tower likely to challenge it any time soon.