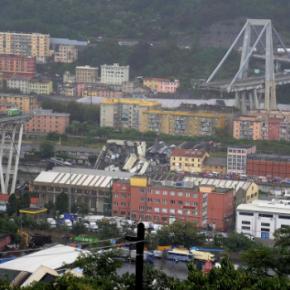 Buildingtalk Online Editor Max Banner takes a look at what could of been behind the collapse of Genoa’s Morandi Bridge, which has so far tragically taken the lives of 43 people.

A range of possible reasons have been raised for the bridge’s collapse, where cars travelling along it fell a horrifying 45 metres down.

Design flaws have been mentioned as a cause; the tendons on the Morandi bridge are made of reinforced concrete, which contains steel. Steel rusts, meaning it is prone to weakening over time.

Some engineers have long expressed concerns about the concrete-encased stay cables, which are somewhat unusual and used by Morandi in a handful of his bridge designs, as opposed to more common steel cables.

Reinforcement work on the tendons with steel took place in the 1990s.

Morandi himself warned of a corrosion risk four decades ago; a report from 1979 recommended constant maintenance of the structure to remove all traces of rust and fill in exposed patches on the reinforcements.

The report produced 12 years after the bridge opened referred to a “well-known loss of superficial chemical resistance of the concrete” because of sea air and pollution from a nearby steel plant.

Mr Morandi, who died in 1989, had a strong belief the reinforced concrete bridge design was okay but referred to the “aggressivity” of the corrosion that was not seen in similar structures in different environments.

General wear and tear has been raised a possibility; was completed in 1967, and normally a bridge is designed to last for at least 100 years.

In December 2012, a public hearing into how to expand the local transport infrastructure saw Genoa’s city council discussed the state of the Morandi bridge, with an industry official warning the bridge could collapse ‘in 10 years’.

Heavy traffic on the bridge may have also contributed to its weakening, over which approximately 25 million vehicles pass per year – it carries a major artery, the A10, that serves the Italian Riviera and links northern Italy to France.

A considerable drop in investment in the country’s infrastructure, which falls behind other economies in western Europe, could also be scrutinised.

It is also important to note the collapse occurred amidst a storm and extremely strong winds.

Also, the motorway operator said work to improve the bridge’s foundation was being undergone at the time of the collapse, whereby it was being constantly monitored.

The government of Italy has ordered an investigation, but experts warn it is too soon to look at only one cause too severely and with many venting their frustrations at the those in positions of power themselves, this is likely to be a tragedy that will take some time to get answers to.