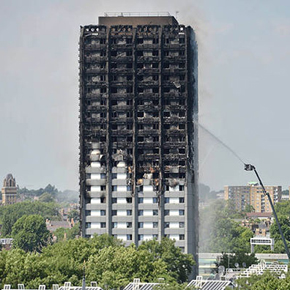 Buildingtalk Online Editor Max Banner takes a look at the the findings of Dr Barbara Lane, an expert commissioned by the Grenfell Tower inquiry, which entered its eighth day on Monday.

Day Eight of the Grenfell Tower Inquiry was an extremely eye-opening one. An in-depth look at the cacophony of cataclysmic errors which led to this tragic loss of life on a mass scale focused on the complete failings of the ‘stay put’ principle, whereby residents were initially told to remain in their flats instead of evacuating, but also the inadequacies of the buildings many sub-standard components.

Soon after the disaster had occurred, emphasis was on the building’s exterior cladding being a major contributory to the tragedy but Dr Barbara Lane’s judgement of a ‘culture of non-compliance’ exposes other areas of the building’s make-up that were not simply not up to standard.

Lets start off with the much-maligned cladding. Experts said the uPVC window frames looked to have melted, exposing combustible materials within them before catching the flammable core of the rainscreen cladding outside the window. This system of combustible cladding panels and insulation was “substantially to blame for the tragedy” and was “non-compliant with the functional requirement of the building regulations”, Lane found.

Along with the combustible aluminium composite material panels and the combustible insulation, Professor Luke Bisby, from the University of Edinburgh’s school of engineering observed a large number of other materials that burn.

He found a polyurethane polymer foam insulation board that featured prior to the refurbishment could have contributed to the fire spreading. There was polymeric spray foam used during the refurbishment and combustible synthetic rubber was also used to join the new uPVC window frames to the original concrete structure.

Furthermore, he said the melting of those window frames and polymer infill panels between windows did not appear to have been fire tested and are likely to have been combustible.

Lane found the cladding produced toxic smoke slowed down the firefighters as they had to put breathing apparatus on: “the ultimate consequence was a disproportionately high loss of life”.

The building’s system for removing smoke from the lobbies was not compliant with building regulations, according to Lane, and did not operate as it should have, with attempts by firefighters to take control of it failing. Smoke could have been cleared from the lobbies floor by floor if it had have worked.

The inquiry heard the heat in the lobbies would have caused “immediate pain” to exposed skin, which put residents off from attempting to leave their flats, with the “thick black smoke” stopping firefighters from using lobbies as a base for their searches.

106 of the 120 apartment front doors were replaced in 2011. They were fitted with all manner of different locks, hinges, letter plates and self-closers that can substantially lower the amount of time the door can resist fire.

48 of them included glazing that wasn’t accounted for by the fire test data and this glass failed prematurely allowing flames and smoke to vent directly through.

Smoke and flames were allowed to spread between the doors and the door frames and a number of self-closers failed, preventing the fire from being contained to a smaller area. Some of the fire doors to the single stairway which should have withstood the fire for an hour failed within a third of that time and were sometimes kept open by firefighting hoses and, in one case, a dead body.

Water supplies to firefighters during the blaze failed, as the main riser pipe system was out of date, Lane said. The building was equipped with a dry main riser in the lobby, as opposed to a more effective wet main riser (which guidance afterwards said should have been in the stairwell). There were no problems initially for firefighters needing water to extinguish the blaze but later on problems became apparent, as with a wet riser, the system is already charged with a pump connected when the fire service arrives.

Grenfell Tower’s lift was designed to be able to be used as a fire rescue lift, but this did not work. It slowed down the time firefighters took from getting to the flat where the fire originated also prevented the firefighters getting equipment further up the building.