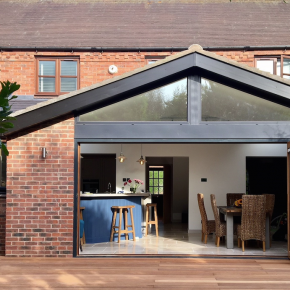 According to research, 67% of burglars break in via a door and 21% manage to get into a home by opening an unlocked door. Yet, more than a third of Brits do not put security measures in place to improve the safety of their home’s entrances. This article takes a further look…

In a survey ran by bifold door manufacturers Vufold, almost 35% of the UK public confessed to not doing anything to make their doors more secure. However, the rest of the respondents had taken precautions to prevent break-ins.

Over a quarter of Brits had ensured their locks meet British standards, which are tested against burglary techniques such as drilling and picking. Some insurance policies will insist that your door has British Standard locks installed.

Despite there being a wide range of different locks available, only 15% of the public had fitted additional locks on their doors.

Rick Collins, director at Vufold, said: “Most bifold doors can be fitted with a multi-point locking system which can provide at least three times the level of security given by a single deadbolt or mortice lock.”

Door alarms were a security measure fitted by one in ten respondents. While door alarms can stop break-ins, they must be kept up-to-date. Research found that ‘old battered alarm systems’ could make burglars think the alarm is not working or in use.

Katherine McEntire, safety expert at SafeWise, commented: “Most security mistakes boil down to simple negligence such as, owning an alarm system but never arming it, leaving access codes out or not keeping them secret and not using strong passwords or changing them frequently, especially if there are smart devices (e.g. cameras) in the home.”

It has been revealed over half of burglars break-in when somebody is in the home. In this case, fitting a security light above the door could help alert homeowners to any suspicious activity – this was done by 8% of respondents. Although, a security light could also have the opposite effect.

Katherine explained: “A security light above a door can only ward off intruders if it mimics human activity. Keeping a light on all day and night might attract attention.”

Glass doors are a popular feature in modern homes but many homeowners may fear that they are difficult to secure, however, this is not the case. When fitting glass doors, ensure they are installed with laminated glass.

Rick commented: “Laminated glass involves bonding two panes of glass together with plastic interlayers. This makes it difficult to shatter and even if a breakage occurred it would stay in place.”

Despite the extra security provided by the laminated glass, this measure was only put in place by less than 5% of those surveyed.

There is a wide range of ways to add extra security to a home’s doors to ensure intruders are kept out and families are kept safe.