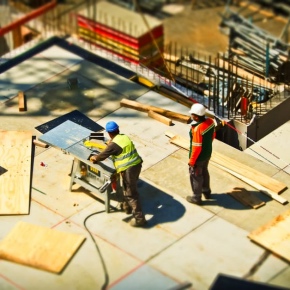 While column inches continue to report on major developments missing deadlines, spiralling out of budget control and in the worst cases, taking short cuts over safety. Silas Wilde, MD of Harlestone Group, examines how the true cost of poor procurement can impact on more than just the bottom line.

“Right now, Tottenham Hotspurs’ new football stadium is still being built. While that’s six months since the first ball should have been kicked in anger, projections for completion still vary.

There’s a cost to this. The most obvious being the continued rental of Wembley Stadium and compensation for season ticket holders, but there is also the build itself, which is being estimated by some commentators at being double that of the anticipated £400 million ballpark figure, and closer to £1 billion by others.

But if isn’t ready – or isn’t on track to be ready – then there’s absolutely no case for pushing this through at breakneck speeds in order to save a few pounds and to get 60,000 people scurrying through its turnstiles.

Especially when the safety, of those involved in the construction and delivery and of course each and every stakeholder that enters the stadium post launch, is and always should be paramount.

While this is a high profile case, it’s not an isolated one. More prominent cases have unfortunately hit the headlines in recent years, when a shortcut to safety resulted in loss of lives.

Over the past 25 years, we have built a business upon four key areas, which has allowed us to build best practice and some stringent standard operating procedures to ensure quality, budget control, that deadlines are met and safety is utmost every step of the way.

So, how should a ‘cost-effective’ project be delivered? Quantity surveyors and project managers have to juggle a large number of balls and do a fantastic job, but procurement officers are, perhaps, the unsung heroes.

They don’t have it easy, and I’m sure they are constantly squeezed from all sides to ensure prices are driven down. But as I have already touched upon, there should be no shortcut to safety.

Counting the pennies could potentially lead to counting the costs, and while we understand here that those in procurement need easy to access and readily available, competitively priced quality products there are a whole host of suppliers clambering over them to offer exactly this.

They need their wider teams to trust in them that if the brief is, say, to procure ethical or local that they’ll do so. If the brief is to source the very best, regardless of costs, then again, that’s what they’ll strive to do.

The devil is in the detail

It’s this minutiae that can often go unnoticed when the bottom line is being scrutinised. It’s at this stage of any project that safety can, but in most cases doesn’t, get overlooked.

The procurement officer needs to make a decision upon which supplier to commission and that they will not be let down, or be deemed to be wasting money and then losing the faith placed in them by PMs and QS.

In my experience, this is where the process can be compromised. But, for the safety of all concerned, never should the cheapest be the best option and neither should a ‘one size fits all’ solution be the result of a decision that has been forced out of a constraint or demanding schedule.

From Ronan Point right through to Grenfell, mistakes, short cuts or poor procurement has had the most dreadful of consequences.

While new policy as a result of such incidents aims to ensure we don’t have to witness such occurrences again, by this time those accountable have been found counting the costs.

With stringent SOPs and processes a quality, cost-effective and on time project can be delivered successfully, and safely. At Harlestone, as a provider of architectural metalwork, general fabrication, fencing and gates and street furniture, we are just part of the process.

But by having quality, cost, deadline and safety as the cornerstones of our business not only do we supply to a brief, we also ensure risk assessment during every step of a project.

We are all governed by legislation and guidance. The Health & Safety executive has produced many documents, not least its 2011 follow up report ‘Health and Safety in Public Sector Construction Procurement’, designed to improved construction health and safety.

The results indicate that, between the initial survey in 2007 and the follow up in 2011, there has been ‘little significant improvement in terms of how public sector client’s discharge their health and safety obligations during the procurement of construction projects’.

It also suggested that there is a relationship between the size of a project and the ‘seriousness to which respondents take their duties in terms of construction procurement and health and safety in particular’.

Tottenham Hotspur’s stadium may continue to run heavily over budget and way past its delivery deadline, but calls for ‘every sparky in London’ to get involved while probably merely a rumour or joke at their expense, isn’t the answer. If anything it would be both a logistical and political nightmare.

Each box ticked, and sign off completed needs doing so for the right reasons. To the only real objective there is – a fantastic new stadium delivered safely and which will not compromise the safety of its visitors.

By managing the expectations and constraints of the wider team and third party stakeholders, by understanding fully the whole raft of lead times, and by installing a set of watertight SOPs to delivery safety above and beyond anything else should go some way to ensuring the procurement role delivers a safe and on time project – and, not just one within budget.”