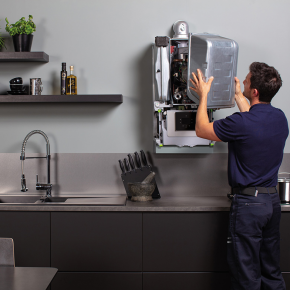 In a recent report, the Committee for Climate Change called for a ban on gas boilers in new homes by 2025, to reduce carbon emissions. Chancellor Phillip Hammond backed the report, announcing the “end of fossil fuel heating systems”, with a shift toward heat pumps for new homes built in the UK from 2025.

Whilst attempts to deal with climate change are welcome, is the switch from gas boiler installation to heat pumps the solution? Are there other solutions that are more viable for both consumers and the construction industry?

A skill shortage in the installation of heat pumps has already been identified and serious investment from the government will be required to enable this skill shortage to be met.

Heat pumps are significantly more expensive to install than traditional gas boilers, but the cost to developers will be mitigated by the government’s plans to relax rules on third party ownership of renewable technologies eligible for the Renewable Heat Incentive.

Soon, developers will in effect be able to ‘own’ the heat pumps they install on the properties they build and receive the RHI tariff of 10.18p/kWh for a seven-year period, offsetting the initial cost of the installation.

A final consideration for the feasibility of heat pumps as a viable solution, is whether the electricity grid infrastructure can supply enough energy to satisfy the demand and whether the cost of electricity will be affordable to consumers.

Increased demand from the 2040 ban on fossil fuel vehicles will precipitate a massive increase in electric cars, causing an even higher electricity demand.

Heat pumps are being offered as a solution, as they are powered by electricity, removing the carbon emissions produced by gas boilers. However, over the last 12 months, 47% of the U.K’s electricity was produced by burning gas at power stations at 38% efficiency. In comparison, A-rated gas boilers are upwards of 94% efficient.

If the U.K were to come off gas, it would require the equivalent of 30 nuclear power stations to meet the electricity demand. Currently there are only 8 power stations in the U.K, with some of those scheduled to be decommissioned.

It doesn’t matter if heat pumps are reducing carbon emissions if the source of their power comes from high carbon producing power stations.

Only 19% of the U.K energy over the last 12 months was produced by wind turbines, so without major growth in renewable energy the energy demand for electricity just simply isn’t feasible or practical for the U.K.

Biomass boilers run on sustainable energy sources, burning logs or wood chips and pellets. Biomass fuels may also include animal, food and industrial waste. However, they aren’t suitable for all homes and require the purchasing and storage of fuel and require ongoing maintenance.

Hydrogen is the most exciting opportunity for low carbon heating. If the U.K switched to a 20% volume hydrogen supply, delivered through the gas distribution system, it would equate to a carbon reduction equivalent to removing 2.5 million cars from the road – without the need for any changes to the current system.

The U.K gas system has an asset value of £40 billion and is one of the best systems of its kind in the world, to dismantle it and let it rot in the ground would be a shame, especially if it can be utilised to deliver a low-carbon alternative.

A 20% volume hydrogen/gas blend is currently being tested at Keele University as part of the HyDeploy project. It’s thought that a 100% hydrogen mix would eventually be possible and manufacturers such as Worcester Bosch have already created hydrogen boilers.

To pursue hydrogen as an option would again, require serious investment in the means of production as currently it is energy intensive to obtain. Research into splitting water into hydrogen and oxygen is ongoing, with hopes that a catalyst can be found that would allow hydrogen fuel to be cleanly produced through electrolysis, removing the reliance on hydrocarbons.

With many options available it seems odd for the government to be so prescriptive and opt solely for electric heat pumps. The solution in decarbonising the U.K heating system could be found in a combination of technologies and by investing in the development of hydrogen as a decarbonised fuel source.

Heat pumps must be attractive to consumers, in terms of comfort, cost and availability before other heat sources are withdrawn or the demand for new build homes could decline, negatively impacting the construction industry.