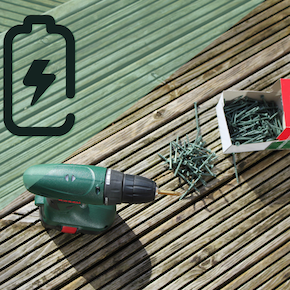 Imagine if improvements could be made in the way we charge power tools. What if the cordless drills, grinders, and saws that we use daily could be charged in 10 minutes flat? Fast charge would mean less downtime and a reduced inventory of batteries and chargers needed. But how do we get there?

Most batteries can be charged fast, but the quicker a battery is charged, the faster it degrades. To avoid irreversible damage, power tool manufacturers limit the charging rate of the batteries. It seems absurd but the charging methodology used in the first lithium-ion powered drills released by Milwaukee in 2005, are largely the same way the present-day tools are charged – by the CCCV protocol (Constant Current, Constant Voltage).

Many brands offer super charging solutions that are designed to reduce charging downtime and maximize productivity. The method often employed, charges the battery to somewhere between 25% and 50% very quickly and then charges more slowly the remainder of the way to 100%. The fastest chargers on the market today still take between 30 and 45 minutes and often result in very high temperature increases – typically linked with irreversible internal damage that will reduce the battery lifespan. Drastic temperature increases are also a potential safety concern.

Constant discussions in the building and construction industry regarding cordless tools speculate about battery technology and what is going to be the next big breakthrough. Will it be new organic compounds, solid state batteries, or something completely revolutionary that doesn’t require changing the chemistry of the battery?

What if artificial intelligence is the answer we’ve been waiting for?

In recent years, there has been significant research around pulse charging algorithms. There are academic and scientific reports, as well as many real-world applications, describing how algorithms improve battery performance on battery chemistries ranging from lead acid to Li-ion to NiMH. Pulse charging algorithms are being called a promising battery charging technique to achieve fast charge and increased efficiencies.

Some companies in the battery technology space are using self-learning pulse charging algorithms as an alternative to CCCV, which allow for ultra-fast charge without compromising the lifespan of the battery. By monitoring the battery in real time and adapting to the ever-changing conditions internally, charging is optimized based on battery response signatures as they occur, resulting in a drastic reduction of irreversible chemical reactions, while also minimizing the temperature rise.

Artificial intelligence is already disrupting many long-established industries and will be a game changer for the construction industry. Fast charging has the promise to reduce operational headaches associated with build sites – the sooner these more efficient energy transfer regime technologies are commercialized, the better.