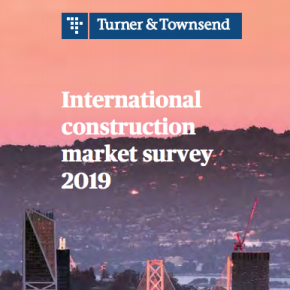 GUEST ARTICLE: UK Construction Market feels the chill, as it braces for Brexit

Longstanding construction cost inflation in London is starting to cool as the UK prepares to leave the European Union, according to research from Turner & Townsend.

The global professional services company has called for greater investment in new technology and methods to ensure the UK remains competitive for investment.

The International Construction Market Survey 2019 shows that construction inflation rose 2.1 percent in the UK capital, with average build costs now standing at an average of £2,880 per square metre.

By comparison, costs in key European commercial centres have started to soar as construction activity in these markets heats up. Construction inflation in Amsterdam rose by 8.8% during 2018, while Dublin saw prices increase by 7.0%.

Berlin and Frankfurt – both seen as competitors to the City of London for financial organisations once the UK leaves the European Union – have seen inflation rise by 4.7%.

These European rivals are reported by Turner & Townsend as ‘hot’ or ‘overheating’ – where the market is characterised by a high number of projects and intense competition for physical resources and labour that is pushing up prices.

Residential and infrastructure investments such as Four, a mixed-use development including four high-rise buildings in Frankfurt, and the expansion of Schiphol Airport in Amsterdam are adding to the heat in these markets.

In contrast, London is now a ‘lukewarm’ market and the rate of construction cost inflation is less than half of that recorded before the UK voted to leave the European Union – down from 5.1% before the referendum in 2016, to 2.1% recorded in 2018.

High cost escalation in London had become an accepted norm as a result of continued investment in new construction projects. This escalation, albeit at a lower rate than previous years, is partly underpinned by rising labour costs fuelled by a shortage of workers.

With two-thirds (65.6%) of the global markets surveyed by Turner & Townsend currently reporting a trade labour shortage, concerns over the availability of labour and restrictions of movement after the UK exits the EU are exacerbating the strain.

To sustain investment in the UK, Turner & Townsend’s report calls for increased investment in innovative technologies and new methods that drive productivity and control costs in the construction sector.

“Consecutive years of rising costs in London have been driven by fierce competition for resource. Now, as the UK prepares to leave the EU, we are seeing UK local markets cool relative to those on the continent,” he said.

“With more than half of London’s construction workers born abroad, the availability of skilled labour as well as potential supply chain disruption caused by Brexit remain critical concerns.

“The industry has been too slow to reform, sluggish in embracing data and technology, and sometimes reluctant to change working relationships between contractors and clients.

“In a global market where cost performance is critical to investment decisions, the UK industry needs to embrace innovative technologies and new methods of construction to improve productivity, mitigate skills shortages and remain competitive.”

Globally, the report highlights a strong construction market, with 28% of markets surveyed classed as ‘hot’ or ‘overheating’. While this has the potential to cushion some of the impacts of any future economic downturn, the level of heat across multiple markets also poses a risk to the cost and delivery of ongoing development projects.

Turner & Townsend argues that investment in construction productivity is essential to unlock and sustain investment across international markets.

San Francisco takes top spot as the most expensive place to build in the world, with the average cost to build at $4,483USD per m2.

Turner & Townsend’s International Construction Market Survey analyses input costs – such as labour and materials – and charts the average construction cost per m2 for commercial and residential projects in 64 markets around the world.