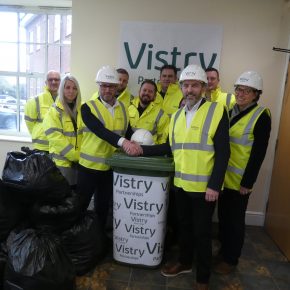 Hundreds of high visibility jackets, bibs and hard hats which featured Vistry Partnerships’ former Galliford Try Partnerships branding have been collected and donated to the charity to help with the building of homes in Sierra Leone.

The charity aims to create houses for hundreds of people who are living in unimaginable squalor, transforming lives and creating new opportunities for them and their communities.

In January, Vistry Partnerships became part of the newly created Vistry Group PLC, which also comprises national housebuilders Bovis Homes and Linden Homes, rebranding in the process. As a result, the company was left with a large quantity of equipment that they no longer had a use for.

Stephen Teagle, Vistry Partnerships’ Chief Executive, explained: “Our fresh brand identity marks an exciting chapter for the business and it has been great to take delivery of all our new branded equipment and see our sites transformed, but our old PPE still has plenty of life left in it and is a vital part of any construction project.

“We know the incredible work that the charity Home Leone is doing helping people to rebuild their lives through the creation of thousands of new homes in Sierra Leone, and we wanted to help.”

Hundreds of staff from across Vistry Partnerships’ nine offices collected the PPE equipment into bin bags and recycling bins and are in the process of handing it over to their local collection points.

Any PPE which was not suitable for donation has been sent to the Greenham recycling scheme. The items are then turned into Refuse Derived Fuel (RDF) which is then used to generate power, resulting in zero to landfill.