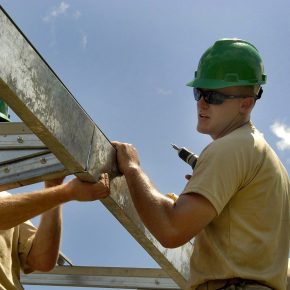 Wearables earned widespread popularity thanks in large part to fitness trackers and the Apple Watch. People appreciate wrist gadgets that give them statistics and encouragement or help them send text messages to friends and listen to music.

Specialised wearables have abundant potential in the construction sector, too. Some track vital signs and give alerts if a person seems overly exerted and may need a break.

Others have proximity sensors and warn wearers if they come too close to an edge, live electricity, moving equipment or other dangers. Wearables that detect falls and feature panic buttons are ideal for lone workers in distress.

Wearables can also detect if an unauthorised person tries to operate machinery or enter a restricted area. During a site evacuation, a software interface showing the locations of all employees currently using wearables could ensure no one gets left behind as everyone progresses toward a safe meeting point.

Virtual reality (VR) can take people into highly detailed worlds as soon as they strap on their headsets. A person can see a favourite musician performing a concert or travel to a distant continent, all thanks to VR technology.

It offers more than mere entertainment, though. It could improve the safety training construction workers receive.

Scaffolding company GKR rolled out a VR training program after realising the impossibility of safely exposing workers to high-risk situations in real life, such as those involving working at height.

The simulations reveal the consequences that some actions can have on a person’s safety. In one scenario, a person neglects to secure a ladder to a scaffold and ends up falling [1].

Also, VR simulations may make it easier to comply with federal standards for scaffolding safety or other things that may seem a bit dry if consumed in traditional ways.

Of course, the internet has made it more efficient for a person to refer to any specifics when needed. However, if people learn about them in a text-based format, some may not retain the information as well as they might in a VR scenario.

A study from the University of Nottingham also suggested that VR simulations can show employers where knowledge gaps exist. The participants went through a simulation for evacuating a building during a fire, complete with heaters and a smoky scent.

Another group in the study saw a PowerPoint presentation instead. The VR segment performed better when quizzed for knowledge and retention, and it also provided information on how people might behave in a real fire.

Conversational artificial intelligence (AI) is a type of technology that spans a couple of advancements most people know well. It can involve chatbots, as well as voice-activated speakers like Amazon’s Alexa-powered collection or the Google Home. Augmented reality (AR) is a technology that blends real-world elements with virtual ones.

A team at The University of West England Bristol is also interested in applying both of these technologies to construction. Several leading construction firms are working with the educational institution on the development of the project.

The idea is that a construction worker would wear an earpiece and an AR-equipped visor. The person could then say a phrase like “show me the building plans” and see the documents displayed in front of them.

The earpiece could also give instructions to the wearer, such as to ensure they follow the right steps in a sequence.

This arrangement could boost safety because it’s a hands-free way of giving workers the immediate information they need. Such a setup could reduce the likelihood of people making mistakes that pose dangers to themselves and others.

The technologies mentioned here are ones most people know well and have probably used before. They have massive appeal and potential applications, indeed. However, these options could be instrumental in making construction work safer.

Megan R. Nichols is a technical writer and blogger. She writes about engineering, science and technology topics. Megan is also editor of Schooled By Science, an easy to understand science blog. With Schooled By Science she hopes to encourage others to learn more about STEM subjects. You can follow her on Twitter.