Blogs » How the Great Fire of London created Building Regulations 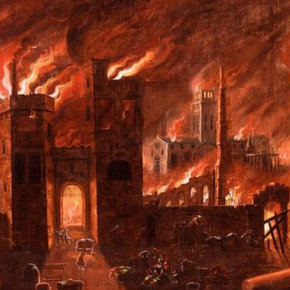 How the Great Fire of London created Building Regulations

Howard Chapman marks the 350th anniversary of the Great Fire of London that destroyed most of the city, made 100,000 people homeless and ushered in new building regulations that are still keeping the capital safe.

350 years ago, in the early hours of 2nd September, a small fire in a bakery in London’s Pudding Lane resulted in catastrophic damage to the city and led to new building regulations being established, some of which are still in place today.

The Great Fire of London spread quickly – a combination of a strong wind, closely built properties and a warm summer which had dried out the wood and thatch used to construct many of the buildings. An area of a mile and a half along the River Thames was almost completely destroyed.

A royal proclamation tried to put a stop to rebuilding the city until new regulations were in place, beginning with the 1667 Rebuilding Act aimed at eradicating some of the risks that had made the fire so catastrophic. The new Building Regulations meant that:

* The only exception is the modern reconstruction of Shakespeare’s Globe theatre, opened in 1997. The 1667 Building Regs were waived so it could be built with original materials.

Post 1666, Sir Christopher Wren oversaw the rebuilding of 52 churches, 36 company halls, and the Monument, a memorial to the great fire. But his plans for new city of wide boulevards were scuppered by people returning to their original plots and beginning to re-build immediately. Within 10 years, the area destroyed by fire had been rebuilt. The street layout remained mostly the same but with bigger buildings mostly built in stone.

Now, at the beginning of the 21st century, the City of London continues to renew itself on an ever larger scale with tall towers but still constrained by the same old street layouts and by some of the building regulations established after the Great Fire of London 350 years ago.

Visit the Museum of London’s new FIRE, FIRE! exhibition for more on how the fire left its mark on the capital and the lasting legacy of Building Regulations.