Blogs » How the Internet of Things is changing bathroom design 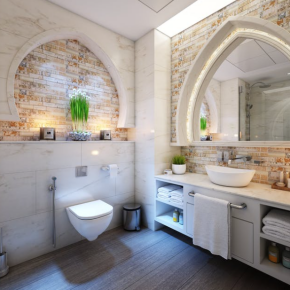 How the Internet of Things is changing bathroom design

When we talk about technological innovation, we seldom think of bathroom. But the so-called IoT (or ‘Internet of Things’) is touted to revolutionise the way in which washrooms both domestic and commercial are designed and used. In this article, we’ll consider the different applications of IoT technology in bathrooms, as well as some of the potential pitfalls – but first, let’s take a look at what the Internet of Things actually does.

What is the IoT?

The idea of an Internet of Things has been around for a while (in fact, the internet pioneer John Romkey produced an internet-connected toaster all the way back in 1989) – but only now has the technology begun to catch up with the concept. The term Internet of Things refers to the interconnection not only of computers, but everyday objects such as lighting, refrigerators, televisions – in fact, almost anything. These objects will be capable of receiving and transmitting data, meaning that they can be controlled remotely.

If technology pundits are to be believed, the Internet of Things is poised to change the way we do…well, just about everything. From smart fridges that order fresh milk when supplies are running low, to smart watches that tell us when to book an appointment with the GP, IoT technology will soon start to influence every aspect of our daily lives – even the humble bathroom.

It may all sound a little far-fetched, but the Internet of Things is gaining ground at an astonishing rate; in fact, research shows that there will be somewhere in the region of 8.4 billion IoT-connected devices by the end of 2017 – and the figure is set to rise exponentially over the following years.

IoT in the bathroom

In the home bathroom of the future, you’ll be able to control the lighting and temperature in real time from an app. With a tap on your phone, you’ll be able get the bathroom warm and cosy before you step out of the shower – no more winter mornings dripping freezing. You could even dim the lights from your phone while sitting in the bath, if you wanted to get seriously indulgent.

Then there are accessories such as smart toothbrushes which monitor your brushing activity and give helpful feedback via an app on your phone, and scales that measure heart rate, body fat and BMI, as well as weight. The scale could then transmit this data to an app to give you an overview of your general health and fitness, and even alert you to things like high blood pressure or stiffening arteries. Thanks to IoT technology, the humble bathroom scale could save your life.

In an office setting, a heat map could show employees whether or not the toilets are in use, spelling an end to wasted trips to the bathroom and standing awkwardly in the corridor. Of course, sensors to monitor footfall are nothing new – but by bringing all the data together into a single app, landlords and facilities managers will be able to draw meaningful conclusions about washroom traffic and make efficiencies in their buildings by, for example, identifying seldom-used bathrooms and using the space for other purposes; or reducing waiting times by enlarging bathrooms that tend to attract queues.

IoT technology could also help reduce your carbon footprint. Sensors will detect whether or not the room is occupied and switch the lighting off when it’s not in use. Flush controllers could be programmed to flush urinal cisterns at set intervals overnight or during holidays to prevent water from stagnating. Toilet paper dispensers will send a reminder to an app on your smartphone when they’re running low so you can order refills, while devices such as automatic soap dispensers will alert you when the battery is running low.

Of course, the smart bathroom presents as many challenges as it does benefits. Installers will need to be as au fait with network architecture and connectivity as they are with flanges and soil pipes. Repairs and troubleshooting will be infinitely more complex; each interconnected device has the potential to fail, and to bring the entire system down with it. IT managers will see their workload increase dramatically as their remit expands to every device in the office, from the coffee machine to the soap dispenser – and homeowners could find themselves bamboozled by their own appliances.

Cybersecurity will be of huge concern: each interconnected device represents a point where hackers can gain entry into the system, meaning that viruses and malware would no longer be limited to computers.

Finally, there’s always the risk that your smart toilet could become sentient and take revenge for the unspeakable things you do to it. Of course, this is fairly unlikely…but you can never be too careful.

Paul Thorn is the MD of Washware Essentials: one of the UK’s leading suppliers of commercial sanitary ware. He’s spent 25 years at the cutting edge of bathroom design, and looks forward to the next generation of washroom technology.