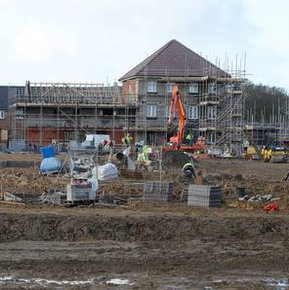 UK construction output was up by 1.8% in December compared with November 2016, mainly because of an increase in new work.

One of the growth highlights of the month was private commercial work that expanded by 5.2% in December.

The ONS also revised the preliminary estimate of GDP. The underlying pattern over 3 months shows a slight expansion of 0.2% in output, revised up from 0.1.

Construction output, compared with December 2015, was up by 0.6%, mainly due to a growth in new housing work.

The only disappointment was that infrastructure activity declined for the 11th consecutive month. Hopefully the announcements over the past 12 months of increased spending on infrastructure will begin to bring growth into this area too.

27% of companies reporting an expansion in their workforce according to the latest Ulster Bank Construction Purchasing Managers’ Index was second highest recorded since the monthly survey was first run over 16 years ago.

Commerzbank economist Peter Dixon said last week that the UK economy has been remarkably strong in the third and fourth quarter with British manufacturing growth stronger than expected in December, showing that the economy remained resilient to the end of the year despite the Brexit vote shock in the summer.