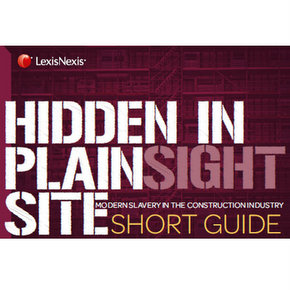 Modern slavery in the construction industry

Howard Chapman, Buildingtalk Editor, reviews the new report from LexisNexis BIS called Hidden in Plain Site – Modern Slavery in the Construction Industry that shows there is widespread slavery in the global construction industry with inadequate measures in place to prevent this exploitation.

Recently Theresa May, the new UK Prime Minister, pledged to spend £33 million on global initiatives to tackle modern slavery, which she described as “the great human rights issue of our time”.

A new report from LexisNexis BIS called Hidden in Plain Site – Modern Slavery in the Construction Industry shows how widespread slavery is in the global construction industry and the measures to prevent this are woefully inadequate.

Case studies in the report include allegations of forced labour being used to build World Cup 2022 stadiums in Qatar – more on this here.

There are 10,000 – 13,000 potential victims of modern slavery in the UK according to estimates from the Home Office in 2014 and the government introduced UK Modern Slavery Act 2015 to help reduce this.

Recent reports* say between 20 and 45 million people are trapped in modern slavery. Construction industry employs 7% of the world’s workforce. The report estimates that £25 billion profit is made in the construction, manufacturing, mining and utilities industries using forced labour. In a recent EU report, the construction industry was ranked second on the list of economic sectors most prone to labour exploitation with 9 countries reporting construction the most problematic industry.

The LexisNexis BIS report says modern slavery in the construction industry is a problem that is ‘Hidden in plain sight’ and calls on all of us, not just governments, businesses and the media, to help combat the problem.

Download the full Modern Slavery in the Construction Industry Report.