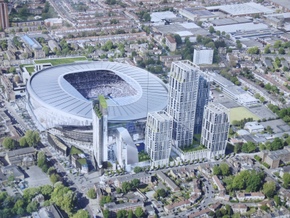 Howard Chapman, Buildingtalk Editor meets Jamie Cassidy from Tottenham Hotspur FC to look at the construction of the new football stadium that promises to be one of the finest anywhere in the world for spectators, visitors and the wider community.

*** Latest news *** (28/5/2016) Spurs negotiate deal to play Champions League home games at Wembley next season plus an option to play all home league and cup matches at Wembley during 2017-18 season. I wonder what the go-compare costs are with what West Ham will pay for the Olympic Stadium?

Football grounds are significant public buildings and can define and enhance urban areas.

The new Tottenham stadium promises to be one of the finest anywhere in the world for spectators, visitors and the wider community, creating a major new landmark for London.

The club will play a key role in the wider regeneration of the area with investment that has been the catalyst for the development of a comprehensive 20-year regeneration programme for Tottenham led by Haringey Council. This will includes10,000 new homes by 2025, plus a million square feet of employment and commercial space and 5,000 jobs, a new park and public facilities and improved transport links. 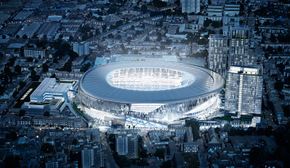 The stadium will be a multi purpose venue with first class conference and banqueting facilities to enable the stadium to be active 365 days a year.

The new build is underway all around the existing stadium – while football is still being played at White Hart Lane.

Work will continue like this until the end of the next season when the team and fans relocate for one season. 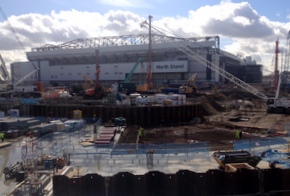 But where will they go? That’s the question I couldn’t get an answer to. There are a number of options being explored including playing at Wembley, West Ham’s Boleyn ground when they vacate, a ground share at new Olympic Stadium or even a move to Milton Keynes – the latter option seems like the most likely outcome.

The old stadium will be demolished in May 2017 while the team relocates for 2017/18 season. This will enable a faster construction of the new stadium that will open in time for the 2018/19 season. 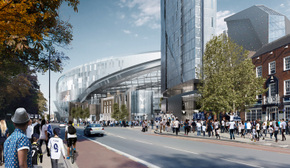 The fan experience and stadium atmosphere are at the heart of the design by leading stadium architects Populous. The new capacity of 61,000 will include the largest single tier in the UK, the Southern ‘home end’, now increased to 17,000. This will be the ‘wall of sound’, the heartbeat of the new stadium that will create the atmosphere that some new grounds have lost. 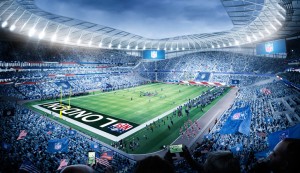 The fully retractable pitch can be rolled away to cater for NFL, concerts and a range of other events whilst protecting the integrity of the playing surface or impacting the facilities tailor designed for football.

Uninterrupted views for everyone, comfortable modern seating, generous leg-room and spectators closer to the pitch than at any other 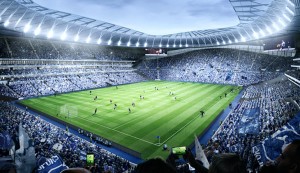 comparable ground in the UK – and wireless connectivity across the whole venue.

I look forward to seeing more of the new Tottenham FC Stadium as it rises like phoenix from the historic White Hart lane ground – and maybe watch some great football too!