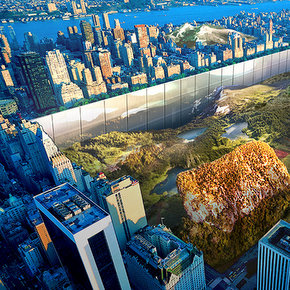 Manhattan in New York is the home of the skyscraper.

At it’s heart is Central Park, a 1.3 square mile of beautiful urban space. However, only a relative few enjoy this natural environment as most of the population either live or work beyond the walking distance from it. But this could all change. 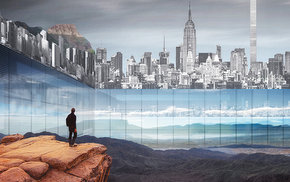 New York Horizon is a proposal by Yitan Sun and Jianshi Wu from the United States to make Central Park the focus of an incredible new multi-functional mega structure by digging down to uncover the mountain that is the bedrock hidden under the existing park. This would create a space along the new cliff sides. By wrapping all four sides of the new Central Park with a 1000-feet tall by 100-feet deep mega structure, it would provide a total floor area of 7 square miles – about 80 times greater than the Empire State Building! 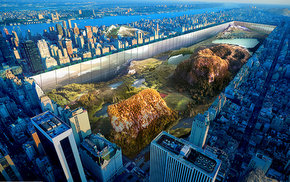 With reflective glass covering on all sides, the landscape inside the new park will create an illusion of infinity right in the heart of New York City – this is the ‘New Horizon’.

Take a look at other prize winning projects including The Hive, a vertical control terminal for advanced flying drones, and Data Tower a sustainable skyscraper in Iceland designed for Internet servers.