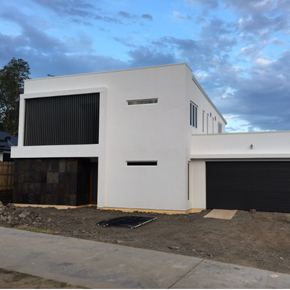 In doors and windows terms, the market is probably more focused around the need for effective ventilation and sound proofing, with thermal efficiency coming fairly low down the list. Things might just be starting to change though, with the completion of the first ever Passivhaus home in Queensland, which REHAU has been closely involved with.

Paul Gerrard, CEO of EE Windows in Brisbane and a REHAU customer, has built his own two storey, 39000 sq ft home to a Passivhaus specification and it was blower tested to achieve an impressive 0.8 air changes per hour even before the installation of the plasterboard.

Paul’s new house features 26 REHAU windows and six REHAU doors, including bi-folds, French and single doors.  All are glazed with SP30LowE glass on the outside and laminated glass on the inside to keep the warmth in during the colder winter months and to keep the house cool during the sweltering heat of summer.  Viridian Comfort Hush glazing was chosen specifically because it has a 0.5mm Poly-vinyl Butyral (PVB) acoustic interlayer, satisfying the Australian requirement for acoustic performance.

The house features a 70mm steel framework, wrapped with 15mm Polastic insulation, a 25mm batten and a 100mm EPS outerskin rendered with a Rockcoat finish.

The windows have been directly fixed to the steel frame and then foamed inside and out.  Pro Clima Tescon Profil Tape has sealed the window frames back to the insulation to achieve an airtight seal.  An aluminium side screen on the front of the house helps to shade the property from solar load.

Paul plans to use the house as a demonstration site to show architects and clients the concept of Passivhaus construction in a real-world Australian setting.  In conjunction with his builder, he is installing an ERV unit to monitor the energy use in the house for 12 months, concentrating on the differential between internal and external temperatures at different times of the year, as well as energy usage and internal air quality.

While I recognise that Passivhaus construction remains primarily a northern hemisphere construct, as an advocate of the technology, it is hugely encouraging to see it spreading around the world, in whatever form.

It might surprise some readers to know that one of the fastest growing markets is actually in China, where REHAU has been involved in supplying our GENEO Passivhaus certified windows for lots of projects recently, including a 5000m² five storey office and apartment building in Zhuozhuo City with an air tightness score of n50=0.1h-1 which is now being used by the Chinese government as a pilot project for Passivhaus technology in offices.