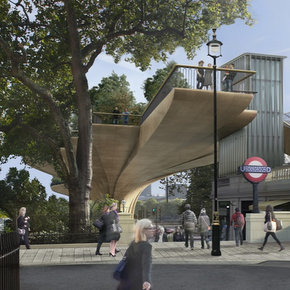 Howard Chapman reports on the latest construction industry news: the Garden Bridge build has been halted and there are signs of a potential post-Brexit property market recovery. Other news includes carbon reduction progress, construction expansion in Ireland and a call for a new Seaside Tsar.

According to Architects’ Journal, London’s new Mayor, Sadiq Khan, has suspended work on the Garden Bridge. This has subsequently halted the enabling scheme at Temple Tube station, over fears it will lead to more public money being spent on the £175 million project.

The London Underground was due to spend £3 million on strengthening the station’s structure to withstand the weight of the Thomas Heatherwick-designed bridge on its roof.

It has been suggested that the currency volatility, sparked by Brexit, could encourage international stockholders to continue investing their wealth in London’s prime property. By storing their wealth here, they could make major profits.

A report from Arcadis says that opportunistic foreign investors could stimulate an increase in the level of sales enquiries received by London developers, which would, subsequently, give a much-needed lift to the British property sector.

Some banks forecast a recovery of the sterling during 2017, with agents predicting some recovery of prime London house prices during 2018.

The survey also revealed that almost three-quarters of respondents favour suppliers that offer low carbon products or demonstrate green credentials. Over half stated that their clients require them to record and act on carbon emissions as project key performance indicators.

In other news, recent reports show that the pace of expansion within Ireland’s construction sector quickened significantly last month.

A recent report, commissioned by the British Hospitality Association, calls for a Seaside Tsar to help Britain’s forgotten seaside towns to fight back after being left to decay for decades.

According to the Department for Communities and Local Government’s Index of Multiple Deprivation (2015), nine out of the 10 most deprived neighbourhoods in the UK are seaside communities.

Butlin’s conducted a survey, which revealed that more than half of the British public have not visited the British seaside in the past three years, with 65% believing that the British seaside is run down and in need of investment. A Seaside Tsar could coordinate a coherent response across all departments and spending – very much like Lord Heseltine’s work in Liverpool in the 1980s.