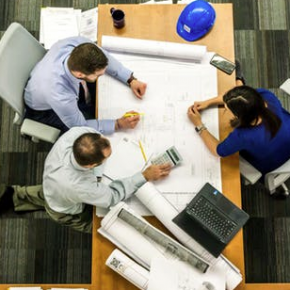 Worker safety is an important component of the construction industry. With the looming divorce from the European Union, change is afoot and possibly in PPE regulations, but having said that, personal protective equipment will always be an important labor issue and unlikely to be relaxed anytime soon.

As with most things, PPE has trends and in this article, we’re going to look at the PPE scene in 2017, and what to expect in the future.

2017 has seen a rise in the use and circulation of fake PPE in the construction industry. The HSE has been specifically interested in this and see it has a major issue that could result in deaths.

To date, the most common form of fake PPE has been safety helmets. It’s a real concern. These fake helmets are so poorly made, some can be split in half with just your bare hands. The immediate risk concerns are obvious.

It’s the worker’s responsibility to manage their own safety. You can’t expect your employer to, they’re not going to be as vigilant as the worker would be. In this case, due diligence would include checking the helmet for consistent color, ideally supplied with manufacturer details and an original information leaflet.

For workers with concerns about the quality and authenticity of their PPE, you should contact UCATT (The Union of Construction, Allied Trades, and Technicians) who will raise the issue with the employer, if you’re concerned about any blowback.

As with everything, safe shoes have moved on and you have some technical advances to keep in mind when looking for a work boot in 2017.

Puncture resistant plates are going to keep you safe from unruly sharp objects like nails and their kin. It offers peace of mind and just common sense for construction workers.

Electrical Surge Protection is helpful too, make sure your boots are made from materials that are not conductive, the better boots will have static dissipation to prevent the buildup of static electricity.

Electrical hazard boots are simply boots in which all components are nonconductive. They are free of any kind of metallic material and are designed to minimize the risk of electrocution.

Static dissipation boots, on the other hand, have a special conductive insole which is designed to prevent the buildup of static electricity. They are used primarily in the manufacturing of sensitive electrical components.

A new construction technique that’s popular in 2017 is the cementing method. It’s simple, it uses a high strength adhesive bond to cement the sole to the rest of the boot. Its advantages are that it really makes the boot lighter and often that means more comfortable.

Unfortunately, new techniques and technology make the boots better and better but you’re still going to need a break in period. Most work boots still need a month or so to become comfortable and flexible, that’s just the nature of the work boots. That rigidness is essential so you’re going to have to grin and bear it.

Safety is still paramount. But thanks to advances in technology comfort and style are now at the forefront of PPE manufacturer’s minds.

The concept of style being an important factor in PPE sounds a little ‘silly’ but studies have shown that having stylish clothing that the worker feels comfortable and not ‘hideous’ wearing has a positive effect on compliance.

In other words, personal protection equipment is worn more consistently which has seen a decrease in the regularity and severity of workplace injuries, especially in construction.

Of course, the connection is not conclusive, it’s only suggestive but compliance of wearing fire retardant apparel thanks to it’s increased styling can only be seen as a positive thing.

The construction industry is still male-dominated, with only 11% of personnel on a building site being female. A recent TUC survey suggests that only 1 in 3 women have specific PPE designed for a woman.

That means 33% of women are wearing PPE that does not fit correctly. Rather than increasing safety, wearing ill-fitting PPE has been shown to increase risk. 57% of women asked in the survey, said that their PPE actually hindered their functionality not improved it.

The TUC is encouraging employers to use suppliers who stock women’s ranges of PPE and to assess the suitability of the PPE worn by the female employees on site.

Health and Safety regulations are about to be run through the mill, including Personal Protective Equipment. But, as it stands, the expert’s opinion is that regulations are likely to get tighter.

There is a host of fake PPEs on the market which are putting workers at risk. Employers are being pressured to be more vigilant but ultimately, it’s the worker who is responsible for their own safety and should avoid fake PPE, especially safety helmets.

Safety shoes are getting closer and closer to street shoes. Both in style and comfort, without losing any of the safety. In fact, 2017 brings new features, new technology, and added protection. Functionality like puncture resistant plates and static dissipation technology.

2017 has seen the importance of style and comfort put front and center. Compliance has been seen to play a major role in increasing protection and better looking PPE increases compliance. However, the opposite can be said for women and PPE with 1 in 3 being forced to wear male PPE which has been reported to hinder functionality.

And who said PPE was boring?