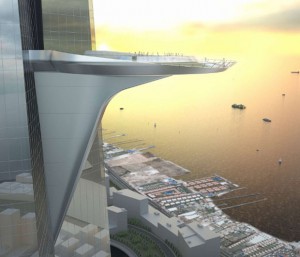 The Jeddah Tower, under construction in Saudi Arabia, will be over a kilometre high and will be the world’s tallest building when it is completed in 2018.

The building will be the centrepiece of a project to regenerate the ancient industrial port – including 5.3m sq ft of new shops, restaurants, offices and residential buildings – and will steal the title of the world’s tallest tower from Dubai’s Burj Khalifa which is 2,717ft high with 163 floors.

Here are a couple of spectacular images from Twitter plus more details on the project.

And here is a link to a great video about the building.

‘The Trellis’ as some are calling it, has been designed by the architect Eric Parry, the man behind the new office development at 10 Fenchurch Avenue. The 309.6m skyscraper is to be built in the City of London. It will have a free public viewing gallery at the top, which can be accessed by lifts, and the highest restaurant in London plus a large square underneath the building, creating a public space. It will challenge it’s neighbour The Shard, built just over the river on the south bank of the Thames, as Europe’s tallest tower. 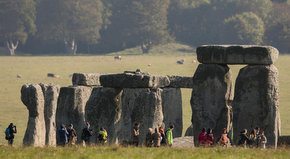 New evidence shows Stonehenge was the world’s first offsite building project. Archaeologists now believe that the enormous stones were cut and then erected locally in the Preseli Hills in Pembrokeshire, Wales over 5,000 years ago. The structure remained there for 500 years until it was dismantled and transported to the current site in Wiltshire.

The 500 year delay in completing the order has not yet been explained – suggestions welcome via the comments box below.