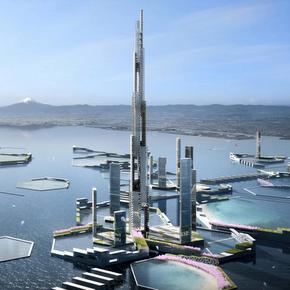 Howard Chapman, Buildingtalk Editor on the new Sky Mile Tower in Japan at the centre of the ‘Next Tokyo’,  a new mega-city that is adapted to climate change. He asks if  new mega cities are the solution to climate change resilience.

Plans for a mile high skyscraper in Tokyo would make it twice as tall as the current tallest building in the world, Dubai’s Burj Khalifa.

Sky Mile Tower will reach a height of 5,577ft and host up to 55,000 people in Tokyo bay, an inlet southeast of the Japanese capital.

The building forms part of in Japan called ‘Next Tokyo’ where architects would create a new mega-city that is adapted to climate change in the year 2045.

Kohn Pedersen Fox Associates and Leslie E. Robertson Associates propose a new city in Tokyo Bay to improve the bay’s resilience natural disasters such as earthquakes and typhoons, as well as a mile-high residential tower as the centre of a new district reached by public transport.

World Health Organization says cities now account for 54 percent of the total global population, up from 34 percent in 1960.

Do new mega cities, like this one proposed for Tokyo bay, offer a solution to climate change resilience?