Blogs » UK construction industry ends the year on a high

UK construction industry ends the year on a high 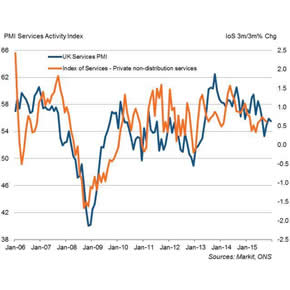 The year begins with strong indicators of growth from the latest Markit/CIPS survey showing that the UK construction industry ended 2015 on a high.

The Markit/CIPS purchasing managers’ survey rose to 57.3 in December, up from seven-month low of 55.3 in November.

The survey continues to signal a more optimistic 2016 for the sector than official data.

Readings in excess of 50 indicate that activity is increasing.

Chris Williamson, Chief Economist at Markit, which compiles the survey:

“The services sector remained the key driver of the UK’s economic upturn in December, helping to offset the recent weakness seen in manufacturing and putting the economy on the starting block for another year of 2-2.5% growth in 2016.

The surveys point to the economy having grown 0.5% in the fourth quarter, a solid but perhaps unexciting pace that means GDP would have risen 2.2% in 2015.

A rosy outlook is by no means assured, however. With business expectations about future workloads dropping to the lowest for almost three years, firms are becoming more cautious in the face of growing uncertainties. The cost impact of the Living Wage, government spending cuts, a potential hike in interest rates, global economic growth jitters and of course ‘Brexit’ are all weighing on business minds and pose significant downside risks to economic growth in 2016. The pace of hiring has already slowed accordingly as firms scale back expansion plans in what might be seen as a warning shot to those taking a complacent view of economic prospects for the coming year”. 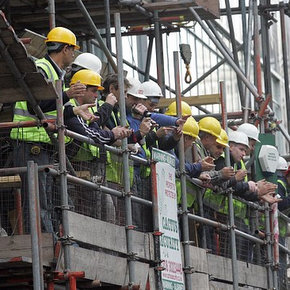 Howard Archer, chief UK economist at IHS Global Insight, quoted in the Financial Times, said “There looks to be pretty solid grounds to believe that the construction sector can achieve decent expansion over the coming months and contribute to GDP growth. The sector will also ultimately benefit from repair and replacement work resulting from the flood damage”.

Infrastructure prospects look good for 2016, with a number of big projects starting including the Thames Tideway tunnel and Hinkley Point nuclear power station.

David Noble, Group Chief Executive Officer at the Chartered Institute of Procurement & Supply: “Service providers were still tackling rising levels of unfinished work in December – now 32 increases in 33 months as the outstanding business index remained above neutrality. With increased business margins as a result of ongoing lower fuel and commodity prices, wages were up. Businesses tried to retain talented staff by rewarding good performance and continuing to increase capacity to meet further strong growth in new business. Some respondents reported the enduring difficulty of finding skilled individuals when needed. Through new lines of business, ongoing – if slightly muted – optimism for the future, new marketing activity and a three-year continually sturdy rise in output from the sector, stability and modesty are the watchwords for this month.”

A final word from ‘This is Money’ news website: “The UK’s construction sector ended on a high note at the end of 2015, enjoying a ‘robust and accelerated expansion of overall business activity. Within the sector, commercial construction performed the strongest in December, followed by residential construction. Bucking the upward trend, however, civil engineering activity slowed last month.