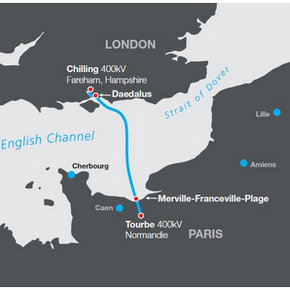 Howard Chapman, Buildingtalk Editor looks at the plans unveiled yesterday for a power converter station to be built on an airfield in Fareham to link the electricity networks of the UK and France and help secure power supply in Britain.

IFA2 is a National Grid scheme to provide a new high voltage electrical interconnector link between British and French transmission systems enabling the export/import of 1000MW of electricity and help secure power supplies for both countries.

There are plans for National Grid power converter station to be built at Daedalus Airfield near Fareham in Hampshire and link the electricity network to Normandy in France via 120 miles (200km) of seabed cable. If approved, the National Grid scheme, costing £500m, could be operational by 2020.

IFA2 reminds me of Operation Pluto (Pipe-Lines Under The Ocean) which was an undersea oil pipelines under the English Channel between England and France built to support the D-Day landings and Allied invasion of Normandy in June 1944. This incredible feat of engineering was a key contribution to winning the war.

You are also invited to any of the next series of consultation events.